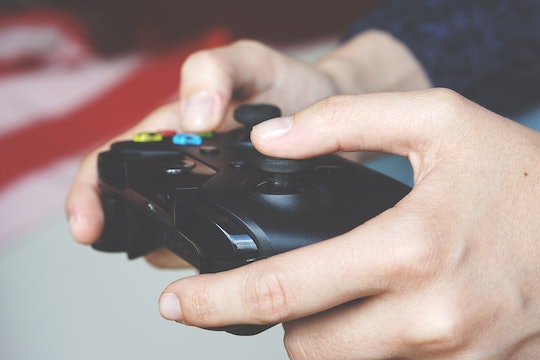 Sometimes, kids are a little too smart for their own good. Take, for example, 7-year-old Nathan, who recently brought home a note from school ordering more video game time. It read as follows, according to Mashable:

Nathan has been doing good in all his classes, exept [sic] for VIDEO GAME CLASS! If he does not stay up all night playing video games, he will get kicked out of school!!! Start letting him stay up all night, & start tonight! He can play anything, computer, Wii, iPod, iPad, phone & any other elecktronick. [sic]

The note was composed with pencil on an oddly-shaped scrap of notebook paper, and signed, "From, The school." Spoiler alert: it was not written by a faculty member, and I'm willing to bet Nathan's not even enrolled in "VIDEO GAME CLASS."

Nathan's mom, Lori, told Mashable that Nathan's brief foray into forgery didn't last long: "I held it up and asked 'what's this about' and he couldn't hide his devious smirk!" Nathan, who's into Minecraft and Mario, said he was inspired by his friend's shirt, which featured a similar note. Lori apparently values ingenuity, because she did allow Nathan an extra 30 minutes of video game time, proving that sometimes crime does pay.

To be fair, Nathan wasn't completely out of line if he thought he might get away with it. Last year, a second-grader in Houston who normally goes to after-school care passed in a note saying "I want Rosabella to go too dus 131 today," and the teacher did indeed send her home on Bus 131 (because the school had no dus). The school reportedly told her parents that they regularly get notes that look like the one Rosabella turned in. Her father told Today that he was terrified and went home to get her after neighbors alerted him that she was locked out of the house.

And Nathan is not the first kid to pull this trick in an attempt to get more screen time, either. A couple of years ago, a similar note made the rounds, and although the origin is unknown, I'm pretty sure "Ronnie's Mom" didn't really tell his teacher that he had her "permishon" to bring his PSP to school.

But if you're looking for more time playing video games, why cut into your sleep? Nathan should take his inspiration from another little forger whose ambitious letter went viral last year. The note, addressed to Mr. and Mrs. Walker, read, "Ther will be no scool this wek so Collin can stay home and play video games. From Mrs. Teague." And just in case the Walkers had a problem with that, the note closed with the declaration, "I am the techer!" Whoops. You flew too close to the sun, Collin. Next time, try typing your note, or at least learn how so spell the title of the person you're pretending to be.