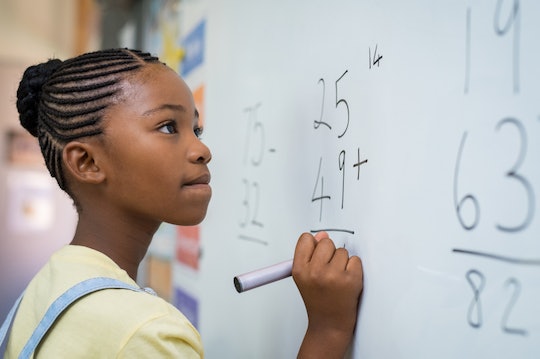 Kids' Best School Subjects Might Be Influenced By Their Personality Traits

Most people have gone through school and found that some subjects didn't click. You just couldn't wrap your mind around certain things, no matter how much studying you did. Now, new search suggests that you shouldn't feel bad about any of that. According to a recent study, kids' academic strengths may be influenced by their personality. In other words, it's totally not your fault if you grew up bad at math.

There are a lot of reasons kids may not grasp certain subjects in school. The cause could be a specific learning disorder, like dyslexia in reading or dyscalculia in math. Some kids may even be behind their peers while young, but catch up or even spring ahead as they age.

But, what if it may also all boil down to their personality?

In a study published in the Journal of Personality and Social Psychology, researchers decided to examine how kids' personalities can affect their academics. To some, it might seem far-fetched to suggest that personality can play a role in school. Learning is learning, right?

For the study, data were collected from more than 1,000 twins, ages 8 to 14, in the Texas Twin Project, as outlined by the study's abstract. In the past, differences in academic skills between people have been linked to how well kids are able to control their behavior and the like when faced with opposing or distracting situations or motivations, as outlined by Science Daily. "Self-regulation" is pretty broad, though, so researchers wanted to dive further into it.

By studying twins, researchers are able to look more clearly at how genetics and the environment might be affecting a given characteristic, as outlined by Science Daily. In this case, they discovered that the connection between executive functioning (what allows you to plan and complete tasks) and proficiency in reading and math seemed to be primarily due to genes, rather than any sort of outside environmental factors.

Margherita Malanchini, the study's lead author, said of the results, according to UT News:

If you think about it, it all makes sense.

It's recognized that there are different ways that kids learn, such as visual learning or auditory learning. If kids learn in different ways, then it would seem to make sense to recognize that their personalities can also impact their academic strengths.

Elliot Tucker-Drob, a faculty research associate at UT Austin's Population Research Center said, according to UT News, "This indicates that some of the genetic factors that predispose children to do well in school are also the same genetic factors that predispose children to be more open to new challenges, creative, intellectually curious, and confident in their own academic ability."

Knowing this might help educators figure out how to better work with children whose academic strengths may not lie in subjects like reading and math. And that means that all kids could potentially end up benefitting.