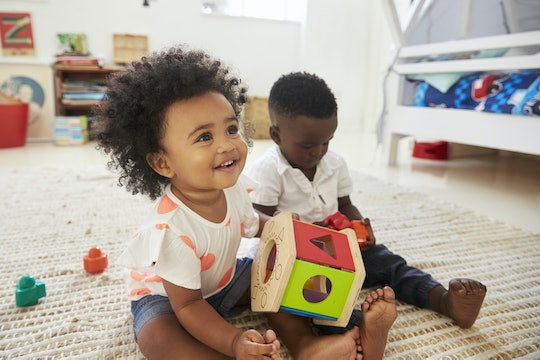 Having tons of toys is somewhat of an inevitable by-product of parenting — many homes teem with the latest fads and many parents worry that their children's play areas look too much like toy stores because of it. But, contrary to popular belief, more toys don't make toddlers happier. Actually, kids are happier with fewer toys, recent research suggested, according to Good Housekeeping. The research was published in the journal Infant Behavior & Development, and it found that children have a happier and healthier playtime when they have fewer toys around. So, in short, parents can feel better about tossing all those scattered LEGO pieces and toy cars they constantly find themselves tripping over.

During early developmental years, children have short attention spans that are exacerbated when given dozens of toys. And because kids are easily overwhelmed with choice, when a child is unsure of what to play with, they often end up playing with nothing at all. Plus, having too many toys teaches children to be passive participants in play so, instead of playing with their toys, they expect to be amused by their toys, according to Verywell Family.

The aforementioned issues are reflected in this recent study. The researchers from the University of Toledo in Ohio examined 36 toddlers between the ages 18-30 months for 30 minutes in two different playrooms — one with four toys and the other with 16 toys, Good Housekeeping reported. They found that, when the children had fewer toys, they were more "actively engaged for a longer period of time" than they were when they had more toy options. That's because they were able to utilize their creative instincts and explore different ways to have fun with the same toy — and they were more genuinely interested in the toys when there were less of them.

"This suggests that the other toys present may have created a source of external distraction, provoking the participants to abandon play with a toy at hand to explore another," the study's researchers said, according to Good Housekeeping.

The children with four toys exhibited one-and-a-half times more interactions with the toys, indicating that young children "are more likely to play in more sophisticated, advanced ways with fewer toys present,” according to Psychology Today. And, of course, the increased involvement with a toy has positive implications for development, such as imaginative and pretend play, self-expression, physical skills like motor coordination, and problem-solving skills.

Plus, kids tend to be more creative when they've got no toys at all. Two German public health workers once conducted an experiment in which they removed all toys from a kindergarten classroom for three months, according to The Independent. The study showed that the children quickly learned to use their basic surroundings (tables, chairs, blankets) to invent games and use imagination in their playing. This helped them develop social skills, it fostered their creativity, and it expanded their attention spans.

Previous research has also recommended time and time again that memories are better than material possessions. Cornell University psychologist Thomas Gilovich, for example, found that people look back on experiences with more satisfaction than they do on their material purchases. He "discovered that people thinking about impending experiential purchases, such as ski passes or concert tickets, have higher levels of happiness than those who anticipate spending money on things," according to Psychology Today.

Nonetheless, the caregivers of these participants in the study conducted by journal Infant Behavior & Development reported that they had an average of at least 90 toys at home for their toddler. And these caregivers certainly aren't alone.

It may be time to clean out the toy closet.