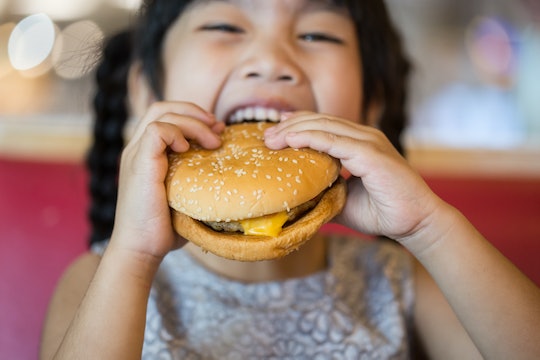 Kids Are Eating Too Much Food Every Day, Study Finds, & It Could Have Serious Health Effects

Children are eating the equivalent of an entire extra meal every day, and experts are definitely concerned, according to new research out of the United Kingdom. Kids are eating too much food every day, a new study finds, and while teen boys appear to be the worst offenders when it comes to consuming the highest amount of excess calories, kids of all ages are affected by excess eating habits. And it can lead to some scary consequences.

Depending on their age, overweight or obese boys consume anywhere between 140 to 500 calories too much every day, according to Public Health England’s (PHE) latest report on obesity. Girls with similar weight issues eat between 160 to 290 calories more than they should when compared to those with healthy body weights, the report found. In particular, the report found boys aged 16-18 were consuming 505 excess calories per day, the Huffington Post reported. But kids as young as four are eating and drinking too many products with high calories, and that can lead to excess caloric intake and alarming health problems as a result.

While this study is from the U.K., people in the United States would do well to pay attention to the findings, too. Obesity rates in the U.K. are some of the worst in Europe, and "two-thirds of adults and a third of children are overweight or obese" there, The Daily Mail reported, but obesity is a major issue in the U.S., too.

Public health officials in the U.K. are calling on food sellers and manufacturers to cut down the calories in their products by 20 percent by 2024 in order to combat the problem there, The Guardian reported. PHE stated that that goal could prevent more than 35,000 premature deaths, and save a ton of money in "social care costs."

But some researchers specifically focused on the issue of kids eating too many calories when addressing the results of the study. Dr. Alison Tedstone, chief nutritionist at PHE, told The Guardian:

Those numbers are very concerning. If kids pick up bad habits when it comes to eating and caloric intake when they're young, it's not exactly a stretch to think it's much harder to try to adjust those habits when they become adults. PHE also noted in its report that, "An obese parent is more likely to have an obese child, who in turn is more likely to grow up into an obese adult," so the cycle continues to perpetuate.

While it's important to keep in mind that calories aren't the end-all-be-all when it comes to food, consuming an entire meal's worth of extra calories every day is generally not healthy or sustainable for anyone, let alone children who are establishing eating patterns that can impact the rest of their lives. The American Heart Association reported that being obese can put you at a higher risk for health problems like heart disease, stroke, high blood pressure, and diabetes, and it's not a bad idea to try to avoid those problems by starting with healthier eating habits in childhood.

When it comes to eating excess calories and future issues kids could face if they do so regularly, Caroline Cerny, an Obesity Health Alliance lead, told the Huffington Post:

It’s a real worry that this new data shows some children who are already an unhealthy weight eat the equivalent of an extra meal a day in calories – resulting in extra weight gain and setting them up for future health problems. Of course we all need to eat calories, but with many everyday products containing high levels of sugar and saturated fat, it’s all too easy to eat more calories than we actually need.

In its report, the PHE seemed to suggest that the food industry and the government should take the reins on cutting calories in the U.K. But healthy eating habits can start at home, no matter where you live. To learn more about healthy eating habits for your family, visit the "healthy habits for healthy families" page on the American Psychological Association's website. The Centers for Disease Control and Prevention also offers tips for parents to help children maintain a healthy weight and develop healthier eating habits.