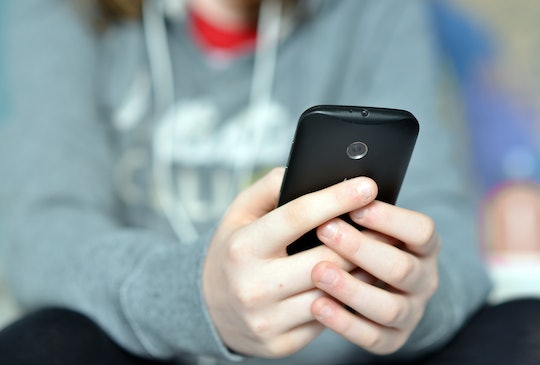 Kids As Young As 11 Are Sexting, Study Finds, & Here's What Parents Need to Know

If you catch your kid sexting, don't be alarmed — well, OK, be a little alarmed, but if it's any consolation, know that your kid isn't the only one doing it. According to recent research, sexting among teens and children as young as 11 has increased over the past decade. As many as one in four young people said they'd received sexts, and one in seven admitted to sending them, but the study's authors have suggestions for concerned parents and educators.

Sexting, according to Dictionary.com, is "the sending of sexually explicit digital images, videos, text messages, or emails, usually by cell phone." So it's certainly disconcerting that kids are engaging in it — but not so much because it's sexual; more so because there can be serious consequences to sexting that could hurt teens' and pre-teens' emotional wellbeing.

The study, published in the journal JAMA Pediatrics, used data from 39 research projects that were completed between Jan. 1990 and June 2016. There was a total of 110,380 participants, all under the age of 18 — some were as young as age 11. Since 2008, the researchers have noticed an increase in sexting among the participants — more 18-and-under kids have been sending or receiving sexually explicit photographs or messages than 10 years ago.

Because evermore young people have smart phones (on average, children in the study were 10.3 years old when they got their first smartphones), and because social media consumes students' attention even within school walls these days, it's no real surprise that more of them are sexting. But parents are growing concerned that sexting could lead to the mass sharing of explicit photography or messages that could haunt their children for years to come.

Moreover, the rise in messaging apps like Snapchat that "delete" photos and videos after they're sent have given a lot more young people the false notion that they're safe in sending explicit content via these mediums.

Teens can sometimes assume safety, explained study co-author and assistant professor in the Department of Psychology at the University of Calgary, Sheri Madigan, according to CNN. "Kids don't really have a clear understanding of cause and effect," she said, CNN reported. "When they send a picture, they may not recognize they can't get it back or that it is really up to the recipient."

But in order to talk to your kids about the repercussions that could come of sexting, it's important to understand why kids do it in the first place, according to the study's authors — and that's largely because they're exploring their attraction to others, CNN reported.

"As teens get older, we are going to see increasing numbers... who sext, just as we see with actual sexual behavior," said study co-author and professor of psychiatry at the University of Texas Medical Branch, Jeff Temple, according to CNN. "It's not terribly surprising considering, as teens age, their interest in sexuality is heightened. They are trying to figure out who they are."

With that in mind, the study's authors suggest that sexual education touch on sexting, according to CNN. "Age specific information on sexting and its potential consequences should regularly be provided as a component of sex education," the authors suggest, CNN reported.

Parents need to know that demonizing sexting won't work, since kids are indeed doing it anyway. This conversation needs to be about reminding pre-teens and teenagers of their own worth, according to CNN, and letting them know that being pressured is not OK.

But the conversation doesn't just mean telling kids why they should be careful about sexting — it also needs to be about why, if they receive sexts, they should never harass or extort someone with those images.

Because relationships among tweens (children 10 to 12) are often short-lived, they are more vulnerable to having their sexts forwarded without consent or being subject to sextortion, which is the use of nude images and/or videos as a form of threat or blackmail, according to CNN. In fact, 12.5 percent of young people reported having been forwarded a sext without consent from the sender and/or the receiver.

Although girls and boys sext a similar amount, girls reported feeling more pressure to sext and also worried more about being judged harshly for sexting (read: slut shaming) or for not sexting (read: being called "prude") than boys, according to CBS.

Girls can often face more emotional stress than boys during sexting, since boys may see sexting as an opportunity to showcase their social status, but the double standard affects girls unfairly, CBS reported.

To avoid the emotional stress from nonconsensual and coerced sexts altogether, parents and educators need to have conversations with their children and students early on.

"Parents should be proactive and not reactive," Madigan said, according to the Scientific American. "If you have the conversation early and often, when problems arise, then kids know they can go to their parents and talk to them."