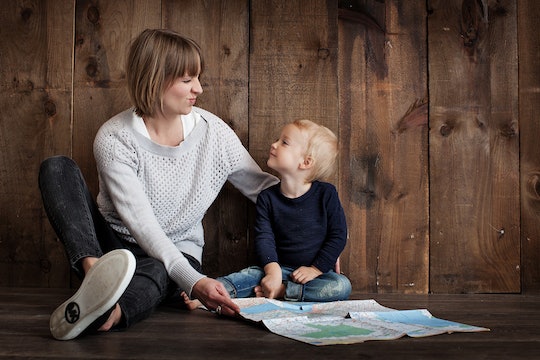 Kids Ask Their Parents 73 Questions A Day, Study Finds — But Are You Even Surprised?

Before I had kids, I was prepared for motherhood to be physically exhausting. Between waking up with a baby every two hours at night, changing a million diapers, eventually potty training, and catering to my child's other basic needs for the first few years, I knew it would be hard work. What I wasn't prepared for, however, was how mentally exhausting parenting can be. Because when that babbling toddler starts forming sentences, the questions start — and don't stop coming. "What happens when you die?" "Where do babies come from?" Some are so existentially wrought that it's hard to come up with a truthful, yet age-appropriate answer. In fact, according to a new study, kids ask their parents a whopping 73 questions a day, with many leaving them stumped for an answer. And I can totally feel that.

For the study, researchers polled 1,500 British parents to see what the most difficult topics children asked about, along with how adults approached them, according to CBS Sacramento. A child’s curiosity peaks at age 4, apparently, and it leaves almost 40 percent of U.K. parents feeling “hopeless” to provide an answer, the outlet reported.

“As children grow up it’s natural to be curious about the world around them,” Dr. Sam Wass, a child psychologist who teamed up with the researchers, said in a press release. “As parents it’s easy to forget just how much of our children’s knowledge comes from what we tell them.”

Additionally, this study discovered that parents are using Google more frequently to come up with responses to the tough questions. Parents are utilizing other tools to help explain complex ideas, too. “Using educational and visual aids such as toys can help to soften the difficulty of broaching trickier subjects," Dr. Wass said in the news release. "Expressing complex thoughts and ideas through familiar items can often help children’s understanding.”

Twitter seems to think that 73 questions per day is actually on the low end of the spectrum. "Does asking 'Why' 28 times count as 1 question?" one person tweeted. (I'm going to take a wild guess and assume he's a parent, because the incessant whys drive me bonkers as well.)

Another Twitter user wrote, "Kids ask an average of 73 questions a day? My 6yo asks more than that before we breakfast. Every day." So this. Add this barrage of pre-breakfast questions to the fact that I'm not a morning person, and I literally can't even.

Another Twitter user shared the most awkward questions children in their lives have asked. "My 7yr old niece. 'Why's that elephant got 5 legs?' The elephant was shall we say, very happy at Chester Zoo." LOL. Well, the zoo is definitely one way to educate kids about the birds and the bees.

In case you're dying to know, according to The Independent, the study found these were the top 10 most difficult questions for British parents to explain to their kiddos:

Yeah, none of these are particularly easy to address. For me, though, one of the most difficult questions to answer hasn't been, "Where do babies come from?" or, "What happens when we die?" Nope. It's been, "Is Santa Claus real?" That one stopped me dead in my tracks last year, when my son was in kindergarten.

Unsurprisingly, the idea that Old St. Nick wasn't real was planted by other kids at school. I figured this would happen at some point, but I hadn't prepared myself for what I'd say. "Umm, well ... what do you think?" I stuttered. To my luck, he responded with, "I think they're lying." And that was that. Since this may very well be the last year he believes in Santa, I'm gonna milk it for all it's worth — and start researching ways to gently crush his dreams before Christmas rolls around next year.