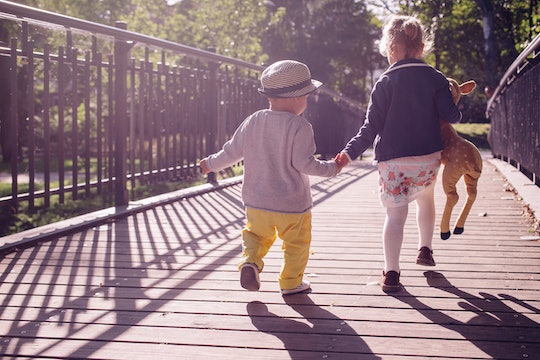 Although raising children outside the confines of traditional gender stereotypes is a goal of many millennial parents, the truth is that it can often feel like a losing battle. Ideas about pink and blue become ingrained super early — think, gender reveal parties and pink or blue baby showers — and definitely solidifies when kids begin school. The pervasiveness of gender stereotyping in children's early years is one reason why preschools in Sweden have been moving towards gender-neutral programming, and it seems to be helping: a recent study found that kids at gender-neutral preschools are less likely to stereotype other children based on their gender, suggesting that emphasizing equality early on could make a big difference in overcoming limiting ideas about gender inequality later in life. And given that those stereotypes can have a big effect on future success (especially when it comes to issues like wage inequality, or workplace advancement), it seems to be a really promising finding.

According to Quartz, researchers at Sweden's Uppsala University recently published the results of a small study where they looked at the differences in attitudes about gender between children in conventional preschools, and those specifically enrolled in gender-neutral preschools. While those preschools are still relatively rare in Sweden, the country itself has for years been at the forefront of encouraging gender equality and neutrality: in 1998, for example, the country's education act was amended to require all public schools to begin promoting gender-neutral policies and teaching styles, according to The New York Times, and since the 1960s, Sweden has also had a third, gender-neutral pronoun, "hen," an alternative to the male "han" and female "hon" (though it didn't actually become official until two years ago).

Beyond the general understanding that gender-neutral preschools would likely be beneficial for children though, there hasn't been much actual research looking at the specific effects the schools' teachings might have on students' beliefs. But the Uppsala University study has shown — at least preliminarily — that the benefits of gender-neutral environments are likely more than just something that seems like a good idea. Researchers found, for example, that the children attending the gender-neutral preschool were more likely to play with children of the opposite gender (even if those children were unfamiliar to them), and that they were "less likely to be influenced by culturally enforced gender stereotypes" than their peers at conventional preschools, according to an Uppsala University release.

As a parent of 4-year-old boy/girl twins — and as someone who has tried to raise them as similarly as possible — I definitely saw a huge shift in their ideas about gender after they began kindergarten last fall. And while I'm sure that hasn't been an intentional effort on the part of their teachers (I highly doubt any of them have ever actually told the kids that certain toys or activities are just for boys or girls), the Swedish preschools seem to prove that, if you want to avoid inadvertently passing along stereotypes about gender to children, you have to specifically go out of your way to actually do it.

In Swedish preschools, according to The Guardian, that means using intentionally gender-neutral language (calling children, "friends" or "kids" instead of "girls and boys," for example), and ensuring that teachers treat students of all genders the same (taking just as much time to comfort boys when they are hurt, let's say, and allowing girls to be angry or more physical instead of expecting them to be quieter or more obedient), and encouraging both genders to use a wide range of toys. It also means ensuring a more evenly-distributed gender balance among the staff, too: while early education tends to be a female-dominated field, about 40 percent of the teachers at Sweden's gender-neutral schools are male.

Oxford Brookes University researcher Dr. Ben Kenward, who worked on the Uppsala University study, told Sweden's The Local that the study's findings help to explain not only why gender-neutral preschools are a good idea, but also why it's so important to begin pushing back against these stereotypes at a young age — especially when it comes to encouraging children to play with opposite-gender children. Kenward said,

Avoiding playing with children of the opposite gender is something which means you're not experiencing certain kinds of interactions that could help you to develop. There are studies that show that playing with building blocks for example – something many girls don't do – is an activity known to help develop spatial cognitive skills ... If you don't limit yourself [according to gender], you have more opportunities for developing, learning, and exposing yourself to situations that allow you to develop.

Unfortunately, even in Sweden, gender-neutral preschools can be a bit of a hard sell to parents, and in 2012, Lotta Rajalin, a gender-neutral preschool administrator, told The New York Times that many adults have felt angry about the push for greater gender equality in schools, with critics arguing that educators are unfairly forcing ideas about gender equality on children.

But studies have already shown that conventional gender stereotypes are harmful for children: According to The Conversation, by the age of 6, girls are less likely to consider that they are "really, really smart," while boys are less likely to think that they get good grades compared to girls. So, clearly, moving away from those limiting ideas about gender doesn't seem like a bad call and isn't a harmful notion for kids.

After all, what the study really seems to show is that, by working to actively avoid teaching gender stereotypes, Swedish preschools are really just giving children a better chance to just be who they are, and explore their natural interests and friendships. And that seems like it will be really beneficial — both as they grow, and in their adult lives.