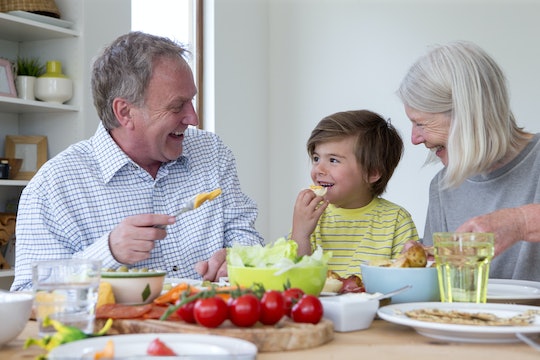 Researchers at the University of Liege in Belgium interviewed 1,151 children between the ages of 7 and 16 for the study, which was published in the journal Child Development, asking questions about what they thought of the elderly, as well as their views on getting old. Other questions included how they felt about their own grandparents, their grandparents' health, and the amount of time that they spend with their grandparents.

For those who don't live near their children's grandparents or can't make time for a visit a week, don't fret. Lead researcher for the study and PhD student of psychology at the University of Liege Allison Flamion explained in a press release via Eureka Alert that the quality of relationships was the more indicative factor of the two evaluation criteria:

Study co-author and professor of psychology at the University of Liege Stephane Adam stated in the same press release that this study is a testament to the importance of quality intergenerational relationships:

For many children, grandparents are their first and most frequent contact with older adults. Our findings point to the potential of grandparents to be part of intergenerational programs designed to prevent ageism.

Improved opinions of the elderly isn't the only way that strong bonds with grandparents benefits children. Time spent with grandparents also builds emotional and social intelligence, according to Parents. This sort of knowledge is necessary to help children navigate interpersonal relationships. Additionally, a study of U.K. children between the ages of 11 and 16 found that close relationships with grandparents were associated with fewer emotional and behavioral problems, fewer difficulties with peers, and lessened impacts of negative experiences like parental divorce.

Children aren't the only ones who benefit from close grandparent-grandchild relationships. A study conducted by Boston College, and published in the online journal The Gerontologist, looked at 374 grandparents and 356 adult grandchildren who were taking part in a larger study. Researchers found that strong bonds reduce depressive symptoms in both parties.

Another study looked at grandmothers in Australia, and found that those who spend one day a week caring for their grandchildren were more likely to offset dementia symptoms and had a lower risk of Alzheimers. These relationships also helped to prevent social isolation, which can lead to depression and even an earlier death.

Finding time to foster relationships with family members can be difficult when schedules are busy and homes are spread out, but the benefits are clear. Children and grandparents alike are better off when these relationships are strong. Next time grandma offers to babysit, take her up on it!