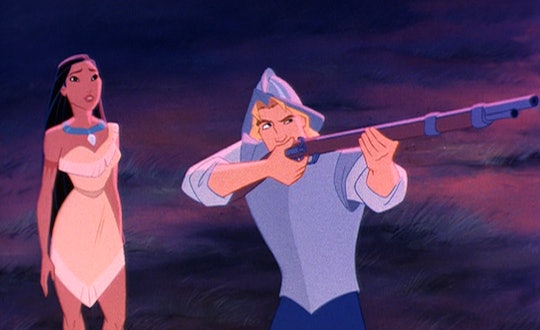 When Kids See Gun Violence In Movies, What Happens In Their Brains Is Terrifying

Adults understand that the violence we see in movies isn’t real — and that trying to play those scenes out in real life can have serious (even fatal) consequences. But kids have a far more difficult time making that distinction. In fact, a study published this week in JAMA is shedding new light on exactly what can happen when kids see even the mildest on-screen depictions of firearms and shootings. Researchers from Ohio State University found that children exposed to gun violence in movies were nearly three times more likely to pull the trigger of a gun placed nearby compared to other children who watched the same movie, but with the gun violence edited out. That’s probably enough to send chills down the spine of any parent, but there’s much, much more.

The controlled experiment, led by Ohio State University professor of communication and psychology Brad Bushman and Wittenberg University assistant professor Kelly Dillon, involved 104 children between 8 and 12 years old. The researchers assigned pairs of children to watch 20-minute snippets of two films: 1991 film “The Rocketeer” and 2004 film “National Treasure.” Both films have a PG-rating which, according to the Motion Picture Association of America, means they may have some profanity or violent scenes, but nothing intense enough to worry most parents. Still, the researchers had some children watch scenes with gun violence left out and others watch scenes that had been left unaltered.

After completing a short survey, the children were allowed to go into another room and choose from a number of toys in a closed cabinet, including LEGOs, checkers and Nerf guns. In another (unlocked) cabinet, was an unloaded and disabled .38-caliber gun. According to the journal article, the children weren't told about the gun beforehand and their parents were able to observe (along with the researchers) what the kids would do when they made the discovery.

Unsurprisingly, almost all of the pairs of children found the gun (43 out of 52 pairs). In 14 pairs, or 27 percent of the participants, the children alerted the researchers about the gun or stopped playing to hand the gun over to an adult. But the rest of the children — more than 42 percent — found the gun, played with it, held it, and even pulled the trigger.

What's more, the children who saw characters interact with a gun in the film clip were far less squeamish about testing out a firearm themselves in real life. The kids who saw either clip with guns and then found the gun while playing held it for a longer time (53.1 seconds on average, compared to 11.1 seconds for those who didn’t). And they pulled the trigger more often (an average of 2.8 trigger pulls, versus 0.01 for those who did not).

That’s basically a nightmare scenario for any parent. In an interview with Huffington Post, one mother described what it was like to watch her child in the study, doing exactly the opposite of what she might have hoped he would do:

Within seconds of closing the door, my 6-year old found the gun, picked it up and pulled the trigger. And the trigger had been pulled again when his 8-year old brother took the gun from him to give it to me. Even seeing my own children with a firearm is pretty chilling.

The idea that exposure to violent media encourages aggression in children has been proven by more than two decades of research and expert opinion. But the research team behind this latest study helped make that connection even more clear by adjusting for nearly every other outside factor that might have an impact. Bushman and Dillon were able to control for variables like age, gender, the number of guns the child’s family had in their home, the family’s and child’s attitudes toward guns, how often they consumed violent media, and even the participants’ natural aggression levels.

After all of those outside factors were accounted for, the researchers found that simply watching a movie with gun violence — even mild gun violence — made children three times more likely to pull the gun’s trigger compared to kids who watched edited versions of the same movie.

If it seems like violence in movies is becoming more commonplace, that’s because it is. A 2014 study published in Pediatrics found that as adults become desensitized to violent images, they also become more permissive about the kinds of violent images they allow their children (and other children) to be exposed to. But that tendency, called “ratings creep,” has real consequences for kids.

Each year, nearly 1,300 children die from gun-related injuries, making guns the third leading cause of child death. And according to data from the Centers for Disease Control and Prevention’s National Vital Statistics System, of the 5,800 children that go to the emergency room each year with gun injuries, more than 21 percent were unintentional.

Certainly, part of the solution would be to strengthen laws that could make it more difficult for children to be exposed to guns. But children are deeply influenced by what they see and hear, too. Filtering what kids see on television, in movies, and in video games might be difficult to do, but these findings suggest it could go a long way to helping kids stay safe if they encounter a firearm in real life.