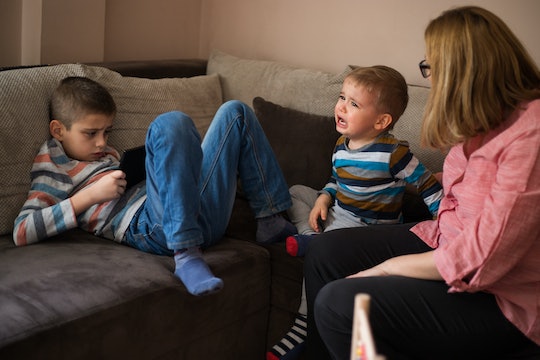 You Actually Can Ignore Your Kids' Constant Fighting During Quarantine, Experts Say

Quarantine? More like quarrelentine, right? I get that my children are feeling cooped up, but the bickering and fighting is really getting to me and my husband. You're probably in the same boat. But is there anything parents can do to stop their kids from fighting during this pandemic? Because much more of this, and we're all going to need a time out.

Recently, a survey published by the Clinton Foundation's initiative Too Small To Fail partnered with Romper and found that when children fight with each other, it puts a lot of stress on the parents. And right now, it seems like kids are fighting with each other more than ever. Combine the bickering and tattling with everything else that is happening right now, and it can feel like it is all a little too much to handle. Psychiatrist Dr. Lea Lis tells Romper that this is to be expected due to the circumstances. "Siblings may be arguing more during quarantine because they are together all of the time and they don’t get their usual breaks," she says. "They are not socializing with other children, so there is more pressure to interact with siblings."

OK, that makes sense, but you've probably also noticed that your normal techniques to dissolve fighting are falling flat. Lis says, "The usual strategies are probably not working," because giving time outs and keeping the kids away from each other are sort of impossible right now. Because of the forced close quarters, she says, "It is important to create new areas where the kids can have some breathing room and personal space. Consider the garage, the backyard, the porch, and other spaces that can be easily transformed into areas to read, relax, do art projects, etc."

In my Brooklyn apartment while I attempt to work from home, finding this separation is even harder. Every family member has taken to long showers or baths, and still, it's crowded. Robin F. Goodman, Associate Director Public Education and Bereavement at Child HELP Partnership, tells Romper that as a buffer in these sorts of situations, time-planned goals might be your best bet. Parents should "help carve out me space and me time for them," she says. "It may take some creativity to mark off times of the day or toys or items that are off-limits to the other person so everyone gets a sense of some personal boundaries and responsibility." It's also important that parents "identify shared family activities, perhaps where people take turns with choosing it so everyone gets a say and a turn getting what they want, as well as doing what someone else wants. Baking cookies, UNO, a puppet show, or a movie, etc. may fit for different people." This helps anticipate problems before they should even arise.

However, if quibbles do happen, Goodman says that it's key to have a few strong rules in place, like no hitting or name calling, no demeaning or hurtful words. For example, in my house, "shut up" and "you're stupid," are huge no-nos, but other insults often get a by so long as they're both flinging them. Yes, I tell them it's not nice, and it hurts feelings, but I'm not some saintly referee. I am a person who grew up with siblings, and I know how the game is played.

On a positive note, Dr. Gabi Martorell PhD, professor of psychology, tells Romper, "Fighting with our siblings isn't all bad. It helps us learn how to navigate social relationships. It may drive parents nuts, but it helps children learn how to cooperate, how to compete, how to negotiate conflict, and how to forgive." Anyone who is tight with their siblings in adulthood can confirm this. I can tell my sister she's being a royal pain in the butt (or something else less than savory), and we both know that it will be forgiven and forgotten. That's just how it is.

When I asked Martorell if there's anything parents can do to stop their kids from fighting, she says, "The types of strategies that are most helpful depend in part on child age. Younger kids are generally going to need more support, and letting them work things out without intervening in some way isn't likely to be an effective strategy." She says that for the younger kids in your house, those children will "benefit from family routines and clear rules. If there is almost always a fight over who gets to pick a book to read first, or who gets to pick a television show, then a clear system for choices may help avoid contentious situations." (If Abel gets to pick the books on Tuesday, then Penelope gets Wednesday, and Atticus gets to do it on Thursday. This is quite the literary brood of children.)

Thankfully, Martorell says, "Young children can also be distracted more easily. So, if you sense tension bubbling up, stepping in with a fun activity or suggestion may bypass the original situation." She cautions that parents shouldn't always try to white knight these situations though, because these conflicts are a crucial teaching moment for children. But when you're at your wits end? You go ahead and Peppa Pig the heck out of that situation. Jump in muddy puddles, do a drive-by to wave at Grandma and Grandpa, bake cookies, who cares — just survive.

However, if it's the older kids, they are going to need special care. Because Martorell notes that the older the kids get, the more autonomy they need and, frankly, deserve. "As long as the fighting is not extreme, it may be more effective to first let them attempt to work out conflict, staying nearby to intervene if necessary," she says. Like Lis, Martorell says that basic rules like no hitting and no name calling need to be in place, but otherwise, conflict resolution is a learned skill, and this is how it's done.

When everything gets too hard, "Ignoring is not nothing," according to Lis. "Most of the behavior is ignorable, like screaming, whining and complaining. It is best ignored, and it sends a message that you are going to pay attention to. As soon as they get along nicely or are playing together, then pay attention, praise, and rewards." As for everything else, specific punishments and rules are necessary, as well as a standard set of guidelines your children are expected to understand and live by. For instance, if Abe hits Penelope, Abe knows that his Animal Crossing is off for a few days. (And what a toll that will take on his bell production.)

Lis suggests that parents should "give them rewards for getting along. This will bring the whole family together. For every day all the siblings get along without arguing, they get a reward. It can be something like a shared toy they agree upon that they can both enjoy." And in general, just cut them — and yourselves — some slack. More fighting, more anxiety, and more irritation is to be expected right now. It's just the matter of managing the stress and our expectations. Whatever we knew of the before, we are no longer there. It's time to adapt.

Goodman says that one adaptation is accepting that kids are balls of pent-up energy. She notes that, provided there is a way for kids to blow off steam, the situation should be mostly controllable, but these times are not for faint of heart, so it's going to take a combined effort to work through them. And it's our job to be both the best coach and loudest cheerleaders for our kids, so they feel safe. Kids who feel safe are going to have more coping mechanisms. They might not be making 30 hour baguettes like us, but they generally figure it out, and it's up to us to guide them.