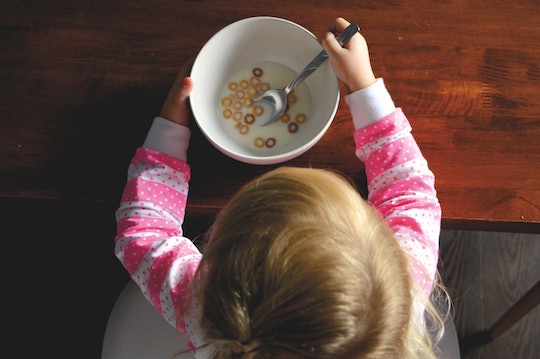 In recent years, there's been a push to better understand why so many children in the United States are considered to be "overweight." Everything from genetics to junk food has been implicated, but new research says that parents might play an important role that doesn't have anything to do with genes. A new study says that kids gain more weight when their parents say they're already overweight.

The CDC has noted that, over the last 30 years, childhood obesity has doubled in the U.S., and that in 2012 one-third of U.S. children and teens were considered overweight or obese. There's an important distinction to be made here about what terms like "overweight" and "obese" indicate, and it's also important to take these assessments with a grain of salt. These tabulations are taken using Body Mass Index, the scoring of body fat proportional to other factors like age and height, which has been widely criticized.

Obesity, which is clinically defined as having an excessive accumulation of body fat that could potentially impair health, is not the same thing as being overweight. Overweight is sort of an in-between, wherein a person is said to carry excessive weight, but that weight is not necessarily excess fat. The general consensus is that those who are overweight are considered "at-risk" for becoming obese, but that's all down to statistics and "standard deviations" from what's considered to be "normal weight" for a given individual.

"Normal" weight is a murky concept, too: depending on one's sex, age, build, and other factors, weight alone is not an indicator of overall health. The focus on weight in childhood has come, at least in part, from a well-intentioned campaign to help kids develop a healthy relationship to food and exercise that will (hopefully) benefit them throughout their lives. But the focus on numbers, and the implication that being overweight or obese is fundamentally bad, has only contributed to cultural norms that praise thinness above all else.

A new study says that those subtle — and often not so subtle – inferences that there's something wrong with being overweight may begin with a child's parents. Recent findings published in the journal Psychological Science found that children whose parents considered them to be overweight went on to gain more weight as they grew up, compared to the children of parents who thought their children were of a "normal" weight.

This is important because those who have set out to crack down on childhood obesity tend to claim that parents should be honest with themselves about the reality of their child's weight situation. But this study shows that if parents have a negative viewpoint, which their children are ultimately made aware of, it's anything but helpful. It could even lead them toward dangerous behaviors: in the study, when the children were followed up with in their early teens, those whose parents had considered them "overweight" when they were 4 and 5 years old were more likely to have gained weight and taken part in dieting behaviors in an attempt to lose weight.

What's really fascinating about this study is that the actual weight of the child didn't seem to have any influence on whether they gained more weight as they grew up, the implication being that their parents — and their own — negative beliefs about their weight may have had more impact in the long run. Researchers can't yet prove the connection, but the findings suggest that a definite link could be found.

Kids look to their parents as they learn how to view the world, and themselves in it. It would make sense that if a child is growing up in an environment with negative beliefs about weight, as unfounded they may be, they're going to internalize those perceptions as they grow up. Research has shown that children learn a lot about body image by observing their parents' relation to their own bodies. One study found that body image problems in young girls can be traced directly back to her mother's own body image issues, which the young women likely observed as they were growing up.

For most parents, helping their children develop healthy habits — like eating a wide variety of nutritious food and getting regular exercise — are obvious priorities. But developing body positivity might be just as vital — if not more difficult than convincing a kid to eat their veggies. Before they can help their kids develop a positive body image — no matter their weight — parents have to check their own bias, negativity, and beliefs about weight. It can be difficult to fight back against fairly ingrained social stigmas, but just like the other health-promoting behaviors we try to instill in kids, it takes work to turn it into a good habit.