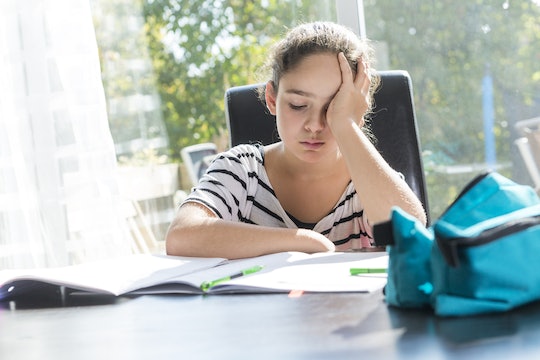 Kids Have Too Much Stuff Going On Every Day, New Study Finds

If you've ever looked around at kids today and felt that they were exceptionally busy, you're not alone. Sometimes, it even seems like elementary school-aged kids have fuller planners than adults. According to a new study, kids have too much stuff going on every day, and their parents are beginning to think it's all a bit too much.

Kids may have always led busy lives in some capacity, but it seems that the children of today are getting the short end of the stick. The issue of over-scheduled kids isn't brand new, but it's definitely one that warrants being approached again. From homework to sports and other extracurricular activities, kids today have a lot gong on — more so than previous generations.

In 2007, Wave 3 News, Louisville's NBC affiliate, reported that students were assigned more homework than previous generations. Since then, this assertion has been strengthened by additional studies, such as one published in 2015, that found students in early elementary school years were getting far more homework than recommended by education leaders. In some cases, CNN reported that researchers found that students were receiving three times as much homework as was recommended.

Homework isn't the only thing with which kids find themselves occupied. In 2014, the U.S. Census Bureau found that 57 percent of kids aged 6 to 17 participated in at least one extracurricular activity after school.

The average American school day is about seven hours, according to the National Center for Education Statistics. Now, add on at least two hours of homework and one hour for extracurriculars; you've come up to ten hours of daily obligations, without even getting to social or familial ones.

If that seems like a lot, you aren't the only one who thinks so, and the problem seems to be worldwide.

Researchers from Boomerang EMEA conducted a new study over the summer in France, Italy, Poland, Portugal, Russia, South Africa, and Turkey, as reported by Kidscreen, to find out just how busy kids are.

After working with a total of 3,500 parents, researchers found that almost 50 percent of kids add four to seven hours of extracurriculars and social events into their typical weekly schedule, as reported by Kidscreen. Additionally, about 25 percent of parents reported that their kids typically lead busier lives than they, themselves do and aren't getting enough downtime where their lives are less scheduled, according to Kidscreen.

Having busy kids might seem great. After all, busy kids can't get into trouble, and they have to be learning new skills, right?

It's a little more complicated than that. “Kids whose time is overly organized don’t have time to be kids, and their family doesn’t have time to be a family. They typically don’t eat well, sleep well, or make friends properly," pediatrician Dr. Deb Lonzer, MD, told Cleveland Clinic.

Spending quality time with family is really important for kids. According to She Knows, quality family time not only creates happy memories, but can boost self-esteem in kids and helps foster positive behaviors.

Now, this isn't to say kids shouldn't have any schedule at all. Extracurriculars and other activities can be great for kids. But, creating extremely busy kids has become something of a norm, and it doesn't have to be.