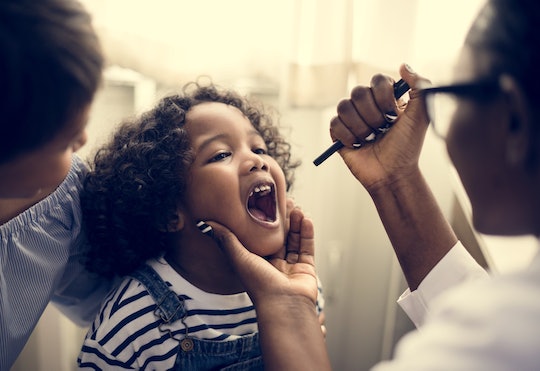 Kids get sick, that's a fact of life. But, there are a lot of factors that can influence just how often kids are getting sick, and other long-term health outcomes. From genetics to factoring in where they live, a lot goes into understanding a kid's health. New research has found that kids' health outcomes may be affected by their parents' education levels, too.

A lot of work has been done around understanding the relationship between education and health. It might be easy to try to look at health as its own standalone factor, but people now know that health doesn't exist in a vacuum. Other social factors play an important role within determining someone's long-term health status.

In 2012, the Centers for Disease Control and Prevention released a press release stating higher education and income were keys to better health. The CDC noted "people with higher levels of education and higher income have lower rates of many chronic diseases compared to those with less education and lower income levels", based on the government's annual report on Americans' health.

Knowing this, researchers were motivated to look into the impact that parents' education levels have on their children. What they found is actually pretty affirming.

The study recently appeared in the Southern Economic Journal, led by Allan Monheit and Irina Grafova at Rutgers University School of Public Health and focused on the link between parents' education level and family health care spending in single-mother and two-parent families, using data from the 2004 to 2012 Medical Expenditure Panel Survey (MEPS).

Researchers found that parents' education past 12 years is linked with higher family health care spending and fewer specific health conditions and a decrease in general poor health status, according to the study. Science Daily reported that this includes conditions like hypertension, diabetes, and asthma.

Essentially, the study supports the well-established "Grossman model of health demand", as reported by IndiaTV. You might not be immediately familiar with the term, but that's OK. Basically, as outlined by Science Daily, the model looks at health as a "'good' that's inherited and increased by investments beyond the price of medical care, and depreciates over time as someone's health naturally deteriorates over time."

It might be easy to blame parents' lack of investment as their fault alone, even blaming people for their education levels, but it's important to remember that health care costs money. Nearly 1 in 5 Americans aren't getting health care, as reported by ABC News, and for many it's because they cannot afford it. Access is another major issue.

There is a lot of work that needs to be done with the United States' health care system. This study highlights how kids are negatively impacted by some of these faults. Disparities when it comes to accessing, affording, and regularly using health care might have real effects on adults and kids alike.