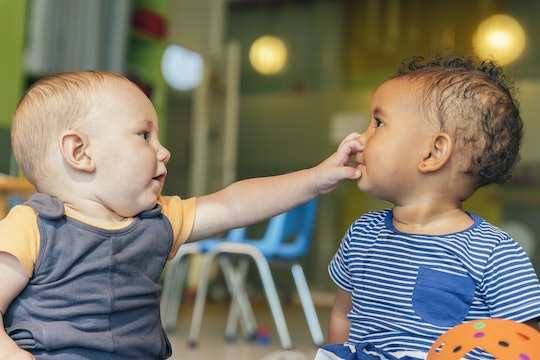 If Your Kid Goes To Daycare, This New Study Will Put Your Mind At Ease

Oftentimes, there's a certain stigma attached to sending a child to daycare so that parents can work — that they're willingly "allowing strangers to raise their kids." Add this societal pressure to the guilt some parents already feel, and a family's childcare arrangement can be a real sore spot. However, a new study will definitely help ease parents' anxieties about dropping off their kiddos each morning. That's because kids in daycare are better behaved than those who stay at home, according to new research.

A new study from Sorbonne University in France — which was recently published in the Journal of Epidemiology & Community Health — tracked the emotional well-being of roughly 1,500 children from birth until age 8. Researchers did so by having parents complete surveys regarding their kids' behavior and mental health, along with the type of childcare they used during the first three years. According to The Telegraph, the surveys, which were taken by parents when children were 3, 5.5, and 8 years old, included 25 items that focused on behavioral and emotional problems, such as social skills, making friends, hyperactivity or inattention, and conduct.

What researchers found was children who went to daycare before age 3 for more than one year were more social than children who didn't go to daycare, as PopSugar reported. More surprising, though, was the that the daycare children were also better behaved than children who stayed at home with a parent, other family member, or nanny.

As Reuters reported, this isn't the first time such findings have been found. Back in 2010, a U.S. National Institutes of Health study also found that children in high-quality childcare were less likely to act out, and scored slightly higher, as teenagers, when academic and cognitive achievement were measured. “These results underscore the importance of interaction between children and their daytime caregivers,” Deborah Lowe Vandell, co-author of the study, said, according to Reuters. “We’re seeing enduring effects of the quality of staff-child interaction.”

It's worth noting that just because this study found a link between daycare and better behavior, doesn't necessarily mean a child who goes to a babysitter or stays at home with a parent is doomed to be a heathen. So there's no reason for stay-at-home parents to freak out, by any means; it's merely a correlation, after all. As the study's author pointed out, what it comes down to is this: “High-quality, centre-based childcare may be linked to lower levels of emotional symptoms." The end.

To me — a mom who once felt immense guilt for leaving her children during the daytime hours to work — there's an even bigger takeaway from this new study: That better behavior in children who attended daycare was observed could definitely help put working parents' minds at ease, especially if they've used daycare from the time their children were very young. Because even if parents know they're doing what's best for their families by continuing with their careers, that nagging little pest called "irrational guilt" still has a way of creeping up on us from time to time.