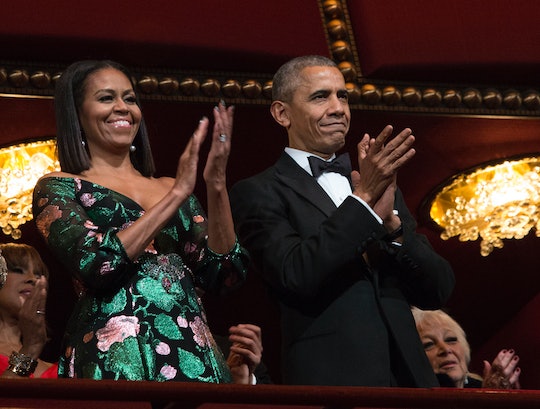 Kids Interview The Obamas Before They Leave The White House, & It Will Melt Your Heart

When it comes to America's kids, the first couple, President Barack Obama and First Lady Michelle Obama, have had a special relationship with their youngest constituents during their time in office. And so, to cap off their eight years in the White House, they sat down and took some questions from America's future leaders. Watch these kids interview the Obamas before they leave, and the result is a heartwarming conversation that's just what you needed after a year-long, ugly political season.

The kids were darling and asked some pretty great questions, too. The interview was part of People Magazine's final interviews with the Obamas in the White House. And while the entire interview is totally heartwarming, it's also a little sad to think about them leaving.

First up with a question was Seble from Brooklyn, who wanted to know: "Are you going to have a big party before you leave office? If so, could I come?"

The answer was yes, from the president. There will be a party, but it's going to be a grown-up affair that goes way past little Seble's bedtime. He offered, instead, to get her to the White House to check out some of the spectacular Christmas decorations. Nice job, Seble, you don't get invited if you don't ask.

Here's a bit of the interview.

Next up was 5-year-old Amira, who wanted to know what advice the Obamas might have for 5-year-old girls who want to be president. The answer was work hard and study.

"And to care about people and start helping them now, you don't have to be president to help people," President Obama replied. "You can be helpful to your mom and dad, to your teachers, to your classmates and friends. And as you get older you can find other ways to be helpful too."

Jacob, who is 5 years old, asked which of the Obama's tells more jokes. Good question. The first lady told Jacob it was the President who tells a lot of "bad" jokes.

The president went on to explain that while his wife doesn't mind teasing him about his big ears, grey hair, and habit of slow talking, he does not have the same leeway to take jabs at his wife. That's a definite no-no.

"She teases me, but I can't tease her," President Obama said.

To which his wife replied, "I think that's fair."

Absalon, who is 8 years old pointed out that Obama has been president for Absalon's entire life, and asked Michelle if she would consider being his president. To which the first lady responded with an unequivocal, "We're out."

Jonathan asked about the naughtiest thing the Obama dogs have done in the White House, prompting an annoyed president to explain how Sunny, the Obama's younger dog, tends to poop on the floor between the Oval Office and the Lincoln bedroom. It's not every day you get to hear the president say the word "pooping."

Tula, who is 4-and-three-quarters asked whether the Obamas have bad dreams. Mrs. O revealed she has a recurring dream she's procrastinated in college and caught unprepared for exams, while the president admitted that he's usually too tired to have dreams. He does snore though, his wife told Tula.

Stella, who is 5 years old asked the Obamas to sing their favorite song. President Obama declined to perform his song, but complimented Stella on her outstanding air guitar work.

The Obamas, parents themselves to two daughters, 15-year-old Sasha, and 18-year-old Malia, according to Heavy, have always shown a special affection for kids during their time in office. In fact, the first lady has dedicated much of her time in The White House to improving the lives of kids around the world. Her Let's Move! initiative, aimed at getting kids to eat healthier and exercise more, has changed the eating and exercise habits of millions of American kids, according to Let's Move!

President Obama is also well known for his easy rapport with kids, even inspiring a Trumblr devoted to all of the pictures of the president interacting with kids.

Whether it's through Kids' "State Dinners" or Take Your Child to Work Day at the White House, the Obamas have been both outstanding role models for and caretakers of America's kids.

“When it comes to building a healthier country, we’re counting on all of you guys to lead the way," Michelle said at the final Kids' State Dinner in July, according to WTOP. "So many of you have already stepped up in your families, your schools, your communities … I see the work of kids, the magic you all do."

It's only fitting that one of their last interviews was with some of those magical American kids.