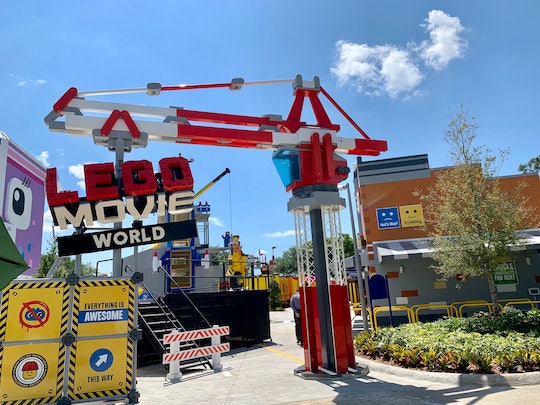 OK I Admit It, LEGO Movie World Was Very Cool

Standing around at the grand opening of LEGO Movie World park at the LEGOLAND resort in Florida, it was immediately clear that I, a single 29-year-old woman, was not the core demographic this park was aiming for. I didn’t get the inside jokes, I didn’t think going through the super soaker water ride while wearing my white t-shirt would be completely appropriate, especially around children, and TBH... even as a kid I preferred to make my Barbie dolls act out complicated melodramas than build castles out of LEGOs. But clearly, kids loved the LEGO Movie World grand opening even though I just wasn't getting it.

More Like This
What To Stream Right Now For Kids Who Love History
Netflix’s Animated Movie Musical Vivo Stars An Adorable Kinkajou
Here's Everything We Know About 'Paw Patrol: The Movie'
Here's Everything You Can Watch On Lifetime This Mother's Day

In order to understand the hype surrounding me, I did what any good investigative journalist does: I went straight to the experts. First up: Keith Carr, the project director of the company that helped design the park, Merlin Magic Making. According to Carr, I was missing quite a bit about what made the park so special and fun. First of all, the park feels like being inside a giant LEGO structure because you kind of are. As Carr explained to me, “So what we find is that all the stuff you see here that looks like LEGO brick actually comes from the set that LEGO has developed for consumer use and then we scale it up 25 times — and it has to be 25 times, and the colors have to be precise.”

And then, anyone who’s ever seen The LEGO Movie is going to love all the Easter Eggs hidden throughout the outdoor space. Carr points to a bright red door, for example. “We have a knock-knock door — it’s a joke shop. Kids have to knock to get in the joke shop, we have a jester that sits there telling you jokes over and over as you go.”

Carr nods to the rocket ship jungle gym we’re standing beneath and shares, “Benny is known for his rocket ships so everything about him is rockets and space. So what better thing to do then create a giant 30-foot play structure that looks like Benny’s spaceship?”

The spaceship structure is, I can confirm, extremely cool.

Of course, the opinions I really wanted to hear were the children themselves. While not as loquacious as Carr, their enthusiasm for the park was just as high. From my (highly unscientific) research, it looks like the kids were most excited about the “Masters of Flight” ride, a giant simulator in which riders load up onto a triple-decker couch (naturally) and then soar through an animated version of the LEGO world. Another favorite was the Unikitty ride, a smaller version of a classic drop tower ride.

In order to properly gauge their excitement, I spoke to several children throughout the park — with the permission of their parents or guardians, of course. Here is what they had to say when asked what their favorite part of the park was:

"My favorite part is when we were on the triple couch because it looks very cool and I loved seeing all the characters that we liked."

"The Masters of Flight ride — it’s just really cool and I liked the big screen."

"Seeing all the characters — Lucy!"

Sometimes it's the simplest statements that say it best. While I still can't say that LEGO was ever my favorite toy, I can say that the Masters of Flight ride at LEGOLAND is pretty awesome.