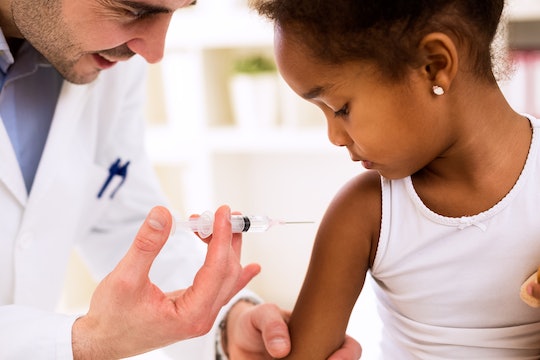 Almost all parents are familiar with a young child's manifestation of abject terror when it comes time to head to the doctor for yet another shot. There are the tears, the tantrums, the holding that flailing toddler down as the needle inches closer and feeling like you're torturing your own child. But what if there were a way to do it all just once? Well, thanks to a cool new technology developed at the Massachusetts Institute of Technology (MIT), this particular brand of sob session could become a relic of a rougher, more cutthroat past. Using this new method, kids could get all their vaccines in one shot one day (hopefully soon) — and that would would be a gigantic relief for everyone involved.

Here's how it would work: Health care professionals would have the option to administer vaccines and other drugs in a single shot because they'd initially be encased minuscule capsules resembling "tiny coffee cups," as MIT News described them. These polymer "microparticles" were developed through new 3-D fabrication method that the MIT researchers touted in a paper in the journal Science released last week.

"The particles are made of a biocompatible, FDA-approved polymer that can be designed to degrade at specific times, spilling out the contents of the 'cup,'" according to MIT News.

This invention would allow for a dramatic decrease in the number of times your kid ends up howling on the examination table because the vaccines would break down over days or weeks after entering the body — effectively administering the different vaccines at the appropriate times that the doctors would plan to do beforehand.

The researchers have successfully tested the method on mice, and they're excited about the implications. Notably, having the option to inoculate children against a whole spate of common preventable illnesses in one fell swoop would make all the difference for those in developing nations. MIT research co-author Ana Jaklenec told The Guardian:

One of the main limitations there is access to vaccines and the fact that you have to come back several times in order to get immunity from the pathogen. A child or a baby is usually seen once, sometime around the birth time by some sort of healthcare worker.

Additionally, taking advantage of this technology could benefit people who need recurring treatments for conditions like diabetes, severe allergies, and even cancer. It could also mean that kids and parents wouldn't need to worry about visiting the doctor again in order to secure those dreaded booster shots. Imagine not only protecting your kid from diseases like diphtheria, tetanus, polio, whooping cough, and hepatitis B, but also knocking that out all at once.

Sounds like a dream that's too good to be true, right? Well, it's true that it's not a reality just yet. As with any potentially monumental development, there are a few kinks and challenges that need to be worked out. For example, the researchers will need to establish a method to ensure that the vaccines can stay stable in the body before they're released into the system, because they're typically kept refrigerated before they're administered.

Also, the all-at-once approach, which seems like an all-around godsend, could have a major drawback, as professor of vaccinology and immunology at University College London David Goldblatt explained to The Guardian. "We prefer to avoid immunizing when you might have an active viral infection," he said. "[What happens] if a child has malaria on the day that the [vaccine dose] is released automatically?"

That situation or a similar one, of course, would be far less ideal. Still, the progress that the research shows certainly indicates that the smart people at MIT and elsewhere will be able to confront these remaining hurdles head-on in order to bring their discovery into the mainstream.