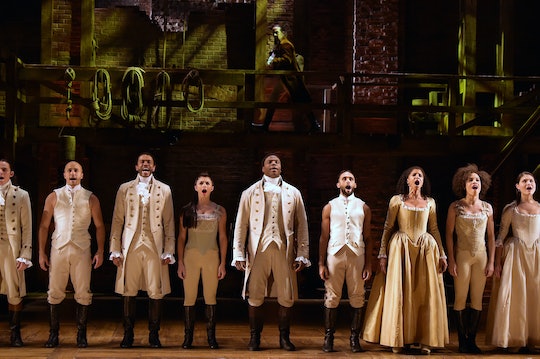 Here's Why Every Kid Needs To Watch 'Hamilton' On Disney+

The Broadway juggernaut, Hamilton will air on July 3 on Disney+, and Americans across the country are readying for socially distanced viewing parties and Zoom singalongs. Still, there are some parents who are worried about the content, but I'm here to tell you why kids need to watch Hamilton.

Hamilton is not just the story of a time in American history told through the beautiful diversity of the Original Broadway Cast. No, with all that is happening in the country and throughout the world right now, it is very much The Story of Tonight. The songs that echo of revolution and equity being sought above all else feel more prescient than ever. Today, when our youths are rising up against a system that has abused them for far too long, we all need to remember that rising up is how this country was founded. Our children need to know that the authors of the Constitution once had leaders who denigrated their relative inexperience, much like what we see today. They need to understand that Hamilton and the other forefathers of the United States were also under the thumb of a man who cared not at all for their safety, but only for his own praise. Our children need to know that can be overcome.

There is undoubtedly some strong language, and there are double entendres in the lyrics that may prick your ears, or have your kids wondering why Hercules Mulligan is worried about the number of corsets a woman wears (if they even know what a corset is), but that's such a tiny fraction of what the show is that it seems hardly worth mentioning. The language is expressive and vital because it reflects the conditions of the time. It is a historical musical written in contemporary language in a manner that gets to the meat of the narrative in an engaging and entertaining fashion. It's history meant to be consumed by a generation raised on rap music and tongue-in-cheek lyrics — and their kids.

Children need to see minorities represented in positive ways for a variety of reasons, according to Dr. Maria Castañeda at the University of Massachusetts. The report noted that is crucial because black and indigenous children (BICOC) of color need, want, and deserve positive representations of their race in their entertainment. It is key for white children to see such a diverse cast because of the massive misrepresentation that has historically happened in media — and in the retelling of history. "The lack of diversity across the U.S. media landscape and the racialized caricatures that are often broadcast on the airwaves creates a cultural context in which people of color are particularly viewed through a stereotypical lens," Dr. Castañeda wrote.

When the news shows the president talking about the problem of immigrants, Lin Manuel Miranda tells them that they are the backbone of our country. He tells how a Scottish man, raised in the Caribbean, the bastard orphan, son of a whore, grew up to be a hero and a scholar. In his words, "Immigrants, we get the job done," a bit more than a wink and nod to the "lazy immigrant" narrative the current administration likes to throw out when they think their base needs something to get mad about.

All kids need to watch Hamilton because the show allows our BICOC to see themselves as the revolutionary leaders, the heroes, and the makers of history. And white kids get to see and intuit the beauty and power of that. As a white kid growing up, there was little in the way of entertainment that showed me that we were not the world leaders and change makers. In suburban Ohio, I was taught about Reagan, and the all-white Forefathers, not Mandela, not Tiananmen Square, not Anzaldúa or Mary Brave Bird, and my television was almost entirely white, save for Amen and Family Matters. White kids need to know that it's not always about them. Full stop. The work of de-centering whiteness needs to happen, and our children must be a part of it.

George Washington liked to paraphrase the book of Micah in his correspondence — "Everyone should sit under their own vine and fig tree, and no one should make them afraid" — with Miranda adding the line that "they'll be safe in the nation we've made." That certainly includes children's ability to safely engage with history in a way that they comprehend just how much the threads of the problems that linger today were extant in our nation over 200 years ago, and that we are still seeking to fulfill our best and most ardent fantasies for the experiment of a republic of free people.

The show also brings in the plight of the women of the era through the Schuyler Sisters, who sing their way into the hearts of the audience, reminding them that the women of the time were often looked over or forgotten entirely. Hamilton's wife, Eliza, serves as the face of earnest resilience through her determination, motherly love, and wealth of self-respect. She is a woman who is held by the constraints of her station, but who refuses to be silent against a husband who wrongs her. Played by Phillipa Soo, the achingly beautiful ballad "Burn" lashes through the presupposition that the women of the Revolutionary Era were passive witnesses to the fight that was raging and the wrongs committed against them. She was an ardent abolitionist, children's rights activist (she established the first private orphanage in New York City), and historian. She and Angelica told the stories.

These founders Miranda writes so eloquently weren't perfect, and the show makes that obvious. Hamilton is a philanderer whose ego is so bright he'd rather confess and tear apart his family than risk being accused of something else. Jefferson owned enslaved Black Americans, and fetishized Sally Hemings while forcing her into a bleak life of servitude — also, John Adams just kind of sucked.

And though it's not addressed, this is all happening on stolen land, and the country they're fighting over sits on soil that was born of a genocide of the Indigenous people who once called it home. This must be mentioned, and should be discussed with your children.

That being said, these are the men we call our Forefathers, and Lin Manuel Miranda envisioned them in a way that speaks to the soul of who we really are as a country. Their pedestal is not perfect, but they stand in the annals of history, cast in the songs of the moment. Miranda tells us all that we don't know who lives, who dies, or who tells our story, and that's why it's so critical for our children to understand that they should live in a way that makes future storytellers stand up and take notice.