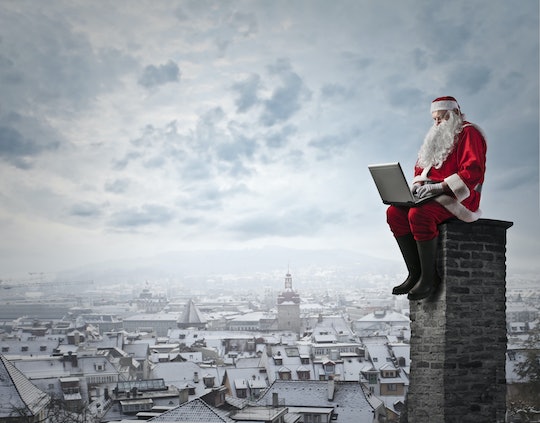 Kids Of Divorce Can "Schedule" Santa's Visit On This Website, So He Won't Miss Anyone

The quintessential image of Christmas is that of kids racing downstairs on the morning of Dec. 25 to see what Santa left under the tree and in their stockings, whether he munched on the cookies he left for them, and to basically drown in a sea of wrapping paper and euphoria. And in this classic conception of Christmas, both of the kids' parents watch enthusiastically, help them set up brand-new video game consoles, and maybe even enjoy a kiss under the mistletoe. But that's not always the reality for children whose parents are divorced, and who may celebrate the holiday more than once and on alternate days. And those little ones may be concerned about whether Santa will know to reach them those days, so kids of divorce can "schedule" Santa's visit using this handy new website.

Anna Friedman dreamed up and created the "Schedule Santa" website to address her own young daughter's questions about how Santa knew to show up when she celebrates Christmas with her mom, according to Babble. Friedman and her daughter, 8-year-old Eleanor often celebrate the holiday on a different day because she shared custody with Eleanor's dad. She started out telling her daughter she was emailing Santa to let him know, but, in order to make the arrangement feel more legitimate and special, she launched the official "Schedule Santa" website this year.

And, needless to say, it has the potential to be a hit.

And as far as I can tell, that's because the concept is solid and the service is simple to use. Anyone who needs to postpone Christmas or celebrate it on a day other than Dec. 25 — for any reason — can just email the big man himself at santa@schedule-santa.com and let him know what's up. Then, according to the website, kids or their parents will receive an automatic response confirming that Santa Claus can, in fact, make it wherever they're going be to, whenever they're going to celebrate.

Santa! We’ve got a girl named Ellie over here in Chicago who needs Christmas on the 17th. Can you do that?”

And Santa gets back right away with a jolly message that's sure to put young minds at ease:

Sure! That works. Now who needs to be rescheduled to the 22nd?

There are plenty of reasons other than divorce that families may need to reschedule Christmas. Babble writer Eden Strong wrote, for example, that her son often ends up in the hospital unexpectedly because of special needs. So, if that were to happen this year, "Schedule Santa" would be a great way to reassure him that he'll get the holiday he's been looking forward to as soon as he's back home.

For now, "Schedule Santa" is strictly an email service, but the brains behind the site hope to add confirmation services via the likes of Facebook messenger, Twitter, and SMS/text message soon. Presumably, this would enable parents to calm their worried children if they, say, have to travel over Christmas and are going to be spending the holiday in a hotel.

I have to say, I'm getting a little bit of a kick out of the idea of Santa Claus hanging around the North Pole checking his email on his iPhone and building his present-delivering schedule accordingly. But then again, he probably has a few elf assistants who take care of the grunt work like sending out the confirmation emails, so that Santa himself can focus on getting where he needs to be on time to make all kids' Christmases magical.