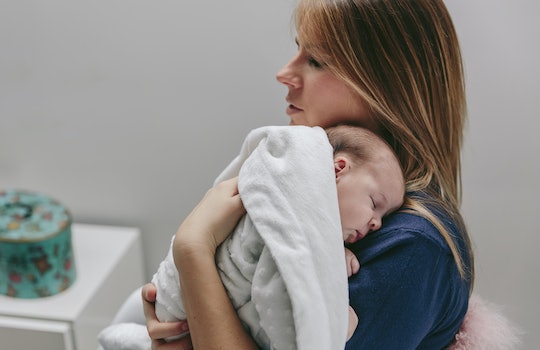 Turns Out, Having Kids "Too Young" Might Actually Be A Thing, According To Science

People are always preaching to women about when they should have children, offering unsolicited advice and shaming them when they don't take it. And, women are always too young or too old to have kids, according to someone with an opinion. But new research says there is some validity to the idea that there's a "right" age to have children. And that's because children of the youngest and oldest mothers face the highest risk of developmental challenges by the time they turn 5 years old, Health Day reported.

The research from the University of New South Wales was published in the journal PLOS Medicine. The researchers analyzed data from the Australian Early Developmental Census for 99,530 5-year-old children in their first year of school in the state of New South Wales in 2009 or 2012, as well as their health and demographic data collected at birth, according to Science Daily. Researchers asked the children's teachers to answer questions about the children's development across five areas: physical health and wellbeing; emotional maturity; social competence; language and cognitive skills; and communication skills and general knowledge. The researchers defined "developmental vulnerability" as scoring in the lowest 10 percent based on 2009 standards, Science Daily reported.

But, and this is a big but, social and economic disadvantages accounted for at least half the increased risk of developmental vulnerabilities among children born to young mothers, according to Health Day. So it wasn't just the mothers' ages that contributed to their risk.

The Centers for Disease Control and Prevention released preliminary numbers that showed birth rates of 103 for every 100,000 women between 30 and 34, and 102 for every 100,000 women between 25 and 29, which means that a large bulk of women are having kids in their mid 20s to early 30s. But that's not to say that women's ovaries just explode when they surpass their mid-30s though. Contrary to popular belief, it's not all down hill from there, and plenty of women can testify. In fact women are waiting longer than ever to have babies, according to a recent analysis of U.S. Census Data from the Pew Research Center.

And Healthline’s State of Fertility Report 2017 found that half of millennial women and men are delaying parenthood for career security and financial reasons. But they're still having babies, and more so than before. As of 2016, a total of 86 percent of women ages 40 to 44 years old are mothers today, compared with 80 percent in 2006, according to a Pew Research Center analysis of U.S. Census Bureau data.

Even the new data reflects the emerging trend of women who are choosing to delay parenthood: only about four percent of children featured in the study were born to mothers younger than 20 years old. Meanwhile, 1 in 5 of the children were born to mothers older than 35 years, according to Science Daily.

"The good news from our study is that the vast majority of kids born to [mothers] aged 35 and older fare well," said Dr. Kathleen Falster of the UNSW Centre for Big Data Research in Health and a co-author of the study, Health Day reported. She added that the elevated risk of developmental vulnerability her team identified is relatively small.

Still, further research needs to be done in order to better understand the elevated risk of developmental vulnerability. More research has the potential to inform policies and interventions to promote positive child development, the researchers explained, according to Science Daily.