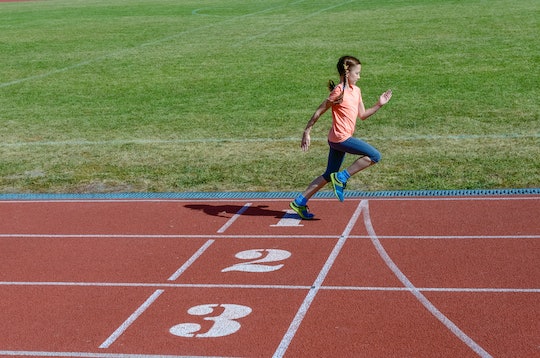 Running & Screaming Might Save Your Kid's Lungs Down The Road

It's not exactly breaking news that exercise is good for kids, but a recent study serves to back up that claim in a big way. Healthy habits during childhood do in fact impact your health for the rest of your life. And we're not talking about a spot of badminton. Hardy physical exertion — which is not something we tend to encourage in our rampaging children — is key to preserving your lungs down the line. Researchers from the European Lung Foundation found that good fitness during childhood reduces your chance of getting lung disease in adulthood — think asthma and chronic obstructive pulmonary disease, which affects 2 percent of the population, per the Huffington Post UK. That sounds like a good enough reason to go outside and play to me.

The study, published on EurekAlert!, is the largest and first study of its kind. Researchers looked at 2,406 children from New Zealand and Denmark, who were divided in two groups that participated in physical fitness tests, according to HuffPost UK. Those in Denmark were tested when they were nine, 15, 21, and 29 on an exercise bike to see how much exercise they could do before tiring out. In New Zealand, children participated in the same test at ages 15, 26, 32, and 38. The results showed that children in better shape had better lung function and it improved as their fitness did, even into adulthood — especially in boys. Researchers' findings held up even when height, weight, asthma, and smoking were taken into consideration.

Thierry Troosters, president-elect of the European Respiratory Society, told HuffPost UK that exercise is an investment in you child's wellbeing. “It seems that regular sports in childhood and adolescence, ensuring development of peak exercise capacity, may be your lung-insurance for later," he said.

This isn't the first time that exercise has been tied to health benefits in children. Regular exercise strengthens kids' hearts, bones, and lungs, controls their weight gain, stabilizes their blood sugar and prevent Type 2 diabetes, and helps to prevent certain cancers, according to HealthyChildren.org For these reasons and others, the American Heart Association recommends that children get a minimum of 60 minutes of exercise every day.

Unfortunately, only one in three children are active at all on a daily basis, according to Parents. What's more, less than 50 percent of time that they do spend on sports and physical education actually qualifies as "physical activity," when you examine the amount of movement they do.

How are they spending their time if it isn't on exercise? Perhaps unsurprisingly, Parents reported that children and teens spend more than seven hours a day on electronic devices. If just one hour of that were replaced by physical activity, they could meet the AHA recommendations.

With so much riding on maintaining an active lifestyle at a young age, you may be wondering what you can do to encourage your own children to spend their time on physical activity. Dr. Fatima Cody Stanford, physician of obesity medicine and nutrition at the Massachusetts General Hospital Weight Center and Harvard Medical School, told Time that a good rule of thumb is to start early and include activities that they enjoy. “Whatever you enjoy is what you will do. [Even] very young kids can tell you what they like and don’t like,” she said.

Stanford also stated that parents can present a good example for their children by making fitness a part of their own lives as well. By going for a run or doing yoga, they can show that exercise is an important part of a healthy lifestyle. Making workouts a family affair is another great way to ensure that everyone stays healthy. Going for walks together before or after dinner, family dance parties, and weekly sports nights are all great ways to make exercise a part of your family's routine, according to Parents.

As the European Lung Foundation study found, exercise can be an investment in your child's future wellbeing. Make it a priority today. Their lungs will thank you.