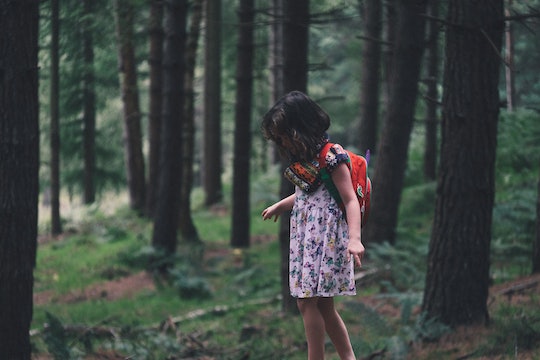 Kids Should Get Outside 3 Hours Every Day

Today, kids have more ways to be entertained than ever before: there are all kinds of toys, gadgets, and gizmos that can keep tots occupied for hours on end. The more mobile-friendly of these past times can be played with just about anywhere: from a long car ride to at home on the couch. It's the latter that worries one expert, a pediatric occupational therapist named Angela Hanscom. This expert says kids should get outside 3 hours every day— but is that even possible in today's world?

Hanscom, who has a Master's Degree in Occupational Therapy, is the author of a book, entitled Balanced and Barefoot, and the founder of TimberNook, a camp program for kids designed around nature-based free play. In an interview with The Huffington Post, Hanscom explained that the motivation behind all these endeavors stems from a place of concern: kids today, she feels, are not given ample enough opportunity to move around. Her line of work — occupational therapy — has traditionally been about helping people recover from or prevent injury and disability, according to the American Occupational Therapy Association. Things like posture and balance, workplace and school environments, and other lifestyle factors can have a major impact on our bodies.

After having her own children and seeing how their school days were structured, Hanscom began to make a connection between how kids were spending their days and a number of struggles they were having, both with things like concentration and fine motor skill development. As she explained to The Huffington Post: "We keep babies in containers in upright positions. They’re not crawling around much, which keeps the fluid from moving back and forth in the inner ear and can affect balance at an early age."

In a blog post on her website about the importance of recess, Hanscom further explained "Children absolutely need movement in all planes in order to develop a strong vestibular system, or system of balance, which is critical in supporting every other sense in the body and turning the brain on to pay attention."

When she spoke to The Huffington Post, she pointed out that when anyone, — but especially kids who are still developing — have their movement restricted, it can have a lasting effect:

Movement through active free play, especially outside, improves everything from creativity to academic success to emotional stability. Kids who don’t get to do this can have so many issues, from problems with emotional regulation—for example, they cry at the drop of a hat—to trouble holding a pencil, to touching other kids using too much force.

While it might seem insurmountable to try to counteract those effects (as anyone who has ever ready a study about how "your desk job is killing you" already knows), Hanscom believes it's possible. It does require parents to change how they think about outdoor play, though. She acknowledges that many parents fear their kids will be at risk playing outside — even in their own neighborhoods. Whether they're fearful of a kidnapping, or getting hit by a car, Hanscom says those fears need to be addressed directly — and with a good dose of prevention.

Teaching children to be aware of their surroundings (like listening and watching for cars on the street) and to not to talk to strangers might seem obvious to a lot of parents, but Hanscom believes those simple lessons can empower kids to engage in the kind of play that is physically and mentally stimulating. She also reassures parents that they actually don't have to direct their kids much beyond teaching them to be safe; in fact, she advises they not interfere too much at all: "There’s so much value in kids creating play schemes on their own," she says. "Kids who are always told how to play have trouble thinking outside the box, and even answering freeform essay questions."

Hanscom's TimberNook program is designed with all of these things in mind, with the added expertise gained from her years of experience with occupational therapy. While it's a more intense opportunity for kids to engage in immersive, unstructured, outdoor play, Hanscom reassures parents there are definitely ways they can help their kids hit that three hour per-day recommendation at home. Older kids may be able to walk to school with others from their neighborhood. Play dates with friends can be extended from a couple of hours to an entire afternoon. Siblings can look out for each other during hours of after-school or weekend outside play.

For parents who worry their kids won't be able to come up with any ideas, Hanscom advises parents to have patience — and faith — in the power of their child's imagination: "When kids first get outside, they don’t have ideas about what to do—if they see a stick, it’s just a stick. But the next time maybe they decide it’s a good tool so they’ll dig with it," she says. "Over time, they’ll come up with more complex levels of play."

More Like This
Teachers Reveal The Go-To Movies They Love To Show In School & Why
Twitter Is Applauding Jennette McCurdy For Speaking Out About Toxic Mom In Memoir
Olivia Newton-John's Daughter Says Her Mom Was Her "Safe Place" In Lovely Tribute
Mindy Kaling Has The Chillest Response To Rumors That B.J. Novak Is Her Kids' Father