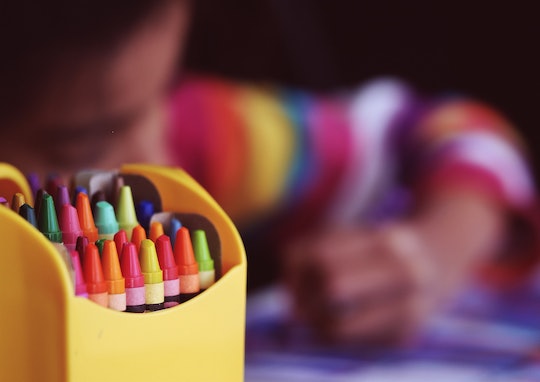 Kids Should Start School At A Later Age, Study Says

For many parents and kids, starting school is a milestone filled with excitement, apprehension, and maybe a little resistance. Just as many kids may have a hard time adjusting to school, plenty of parents have hung around that first day of kindergarten to keep an eye on their kid. Some researchers at Stanford University, however, think kids should start school at a later age — an idea that may have merit in theory, but for many parents would be impossible to put into practice.

In the United States, children typically start school before the age of 6, but in other parts of the world they often don't enroll in primary school until they're six, seven, or eight, according to WorldBank data. This is particularly true in many European countries, one of which worked on the study with Stanford University. The study showed that Danish children who started school a year later than the average age in the U.S. were less likely to be hyperactive by the age of 11. Hans Henrik Sievertsen of the Danish National Centre for Social Research told Quartz that researchers were "a bit surprised at how persistent the effect was." When tested in their late elementary school years, children who had delayed starting school consistently measured reduced inattention and hyperactivity — by as much as 73 percent, according to their findings.

Finland is actually considered by many to have one of the best educational systems in the world and its students consistently rank far higher up than U.S. students, according to PISA data. Not to say that the sole reason for this is that kids start school when they're a little older, but rather, this approach is just one example of Finland's larger educational philosophy. Of course, what really separates Finland from the U.S. isn't strictly ideology: it's access.

In Finland, parents have universal access to pre-kindergarten programs that make it possible for their children to start primary school later. These "pre-K" programs are structured similarly to daycare (which they call "educare"), where the focus is on learning through play, according to the Finnish National Agency for Education. "All children under school-age have a subjective right to early childhood education and care (ECEC)," the agency states, and this is often facilitated through government subsidies.

In the U.S., however, access to pre-K programs and daycare is not something that every family has. Both opportunities are largely determined by a families' socioeconomic situation — a challenge acknowledged by the U.S. Department of Education back in 2015. While many programs are intended to be state-funded, data from the National Institute for Early Education Research that was released in 2013 found that several states weren't funding pre-K programs, and that many of those that do don't keep track of funding data.

While research into school readiness and the impact of early childhood education on kids' development is important, it must be put into varying socioeconomic contexts. What's possible for families in one country may very well be impossible for families in another, no matter how compelling the research may be. The hope, though, is that research like Stanford's might compel the federal government to invest funding and resources into programs that will make such research-backed recommendations possibles for families that choose them.