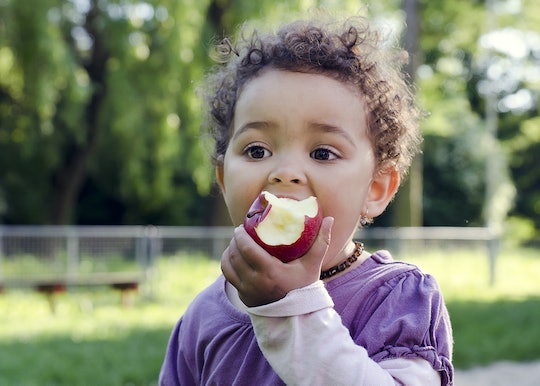 This Could Be The *Real* Reason Your Kid Won't Eat Healthy Snacks, According To Science

Adults and kids have more commonalities than you might think. Case in point: Both age groups can't resist a good snack. Whether your family is all about the sweet treats or if your brood prefers salty foods between meals, most parents would probably agree that snacks make everything better. But as amazing as snacks can be, they can also complicate healthy eating habits, especially when it comes to kids. The good news is a new study found that kids' snacking habits might be genetic, and it could help families who want to set and achieve long-term health goals..

If you've ever noticed that you and your kid both prefer chips over ice cream, it's probably not a coincidence. A recent study published in Nutrients claims kids' snacking habits are related to genetics and can be boiled down to three genetic variants, according to Genetic Engineering and Biotechnology News. A genetic variant is an alteration in a person's DNA sequence, according to Genos, and it's what makes each person unique. A variant can determine something as simple as a person's eye color or it can determine whether a person is predisposed to a certain disease, for example. In the case of this study, researchers at the University of Guelph looked at three possible genetic variants related to taste: "sweet preference, fat taste sensitivity, and aversion to bitter green leafy vegetables," according to Science Daily.

Throughout the course of three days, researchers tracked the day-to-day to eating habits of 47 children aged 18 months to 5 years old, according to Yahoo, and they determined that 80 percent of the group carried at least one of the three genetic variants. Additionally, researchers analyzed each individual's saliva to determine their genetic taste profile.

Unsurprisingly, most of the kids had the sweet tooth variant and this group gravitated towards foods loaded with sugar. Interestingly enough, researchers found that kids with this genetic variant consumed sugary foods mostly in the evenings. Children with the fat taste sensitivity variant opted for snacks with a higher fat content (think chips or cookies loaded with empty calories) while participants with an aversion to vegetables also went for higher-energy density treats. Higher-energy density foods are items that contain greater percentages of fat and sugar, or as I like to think of it, foods that give you a nice boost of energy before you crash (aka food coma).

Elie Chamoun, a researcher on the study and Ph.D. candidate in the Department of Human Health and Nutritional Sciences at the University of Guelph, believes the findings can be traced back to science. Kids with fat taste sensitivity, for example, might have a "low oral sensitivity" to "fatty foods," and they might not be able to "sense" it when they're overdoing it in this area, according to Neuroscience News.

But what do these findings actually mean? It's not necessarily groundbreaking that kids like junk food, right?

As it turns out, however, this study is pretty groundbreaking. If a concrete connection between genetics and taste is confirmed, a test could be developed to determine a child's genetic taste variant. Knowing your kid's variant could help you better understand their eating habits and what type of junk food they're drawn to.

Chamoun said of the potential test's benefits, according to Science Daily:

This could be a valuable tool for parents who might want to tailor their children’s diet accordingly. For example, if you know your child has a higher desire for sweet foods based on their genetics, you might be more likely to limit or reduce their accessibility to those foods in the home.

In the meantime, it might be beneficial to analyze your own snacking habits in comparison to your child's. If you notice a pattern, it could be that you two share a genetic taste variant. And if you determine that you both aren't fans of vegetables, for instance, you'll probably be more understanding the next time your kid complains about eating broccoli because there's a good chance it's science's fault.

Of course, this study isn't meant to shame people who love junk food or enjoy snacking. Chamoun's intent is to give parents a more informed understanding of their kids' eating habits and to help them establish long-term health goals if that's something they're interested in doing. The more you know, right?