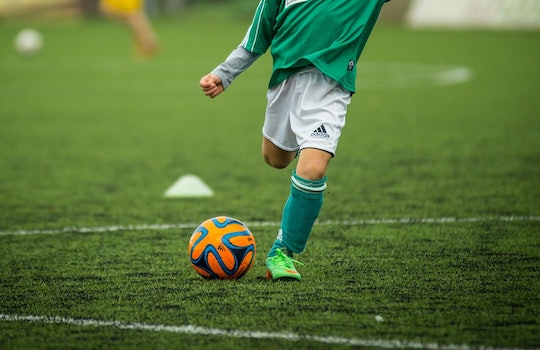 There is light at the end of every tunnel, or so it's said. Honestly, given the current state that the world is in, this is sometimes hard to believe. It's starting to seem that each and every day will contain some form of horrifying news to go with it. But, rest assured, good things are still out there, and thanks to technology and social media, these good things are being brought to light more and more. One mother's Facebook post, for example, has recently gone viral for just that reason, as her kid's soccer photo shows positive co-parenting at its finest. And you'll definitely want to read what she had to say about it.

Emilee Player posted a photo to her Facebook page on Saturday that has since racked up over 30,000 likes, and over 80,000 shares. The photo, which shows five backs to the camera, four adults and one little girl, sends a powerful message about co-parenting that everyone needs to hear. Player, who is on the far left of the photo, is featured alongside her husband, her husband's ex-wife, and her husband's ex-wife's new husband. Yes, that's right: all four parents and step-parents are joined together to support Player's step-daughter, Maelyn Player, 4, at her soccer game.

"Because of us, I will never believe co-parenting can't work!" Player captioned the photo. "I KNOW through experience it CAN WORK! Choose to do what's best for your child and everything will just fall into place," she continued, followed by a heart emoji. Clearly, it's a sentiment shared by thousands of other families, given the popularity of the post.

Speaking to Today, Player said that the family has worked hard to support their kids, never letting their own issues get in the way of the children's best interests:

You can learn how to put your differences aside and do what’s best for your kid. At the end of the day your kid is watching you, and we want to teach Maelyn to love other people.

Player also told The Huffington Post that this wasn't anything new for the family. They regularly do activities together and are committed to staying one family. “Let go of any past feelings you may have and make it work for the sake of the child,” she said. “Stay strong. It is work every single day to keep this going.” And truly, as Player's post indicates, all that work is worth it.

As co-parenting becomes more and more commonplace, even among celebrities like Kourtney Kardashian, Player's post serves as a poignant reminder that being there for your kids is the most important part of being a parent — even if you have to approach it from a less traditional angle.