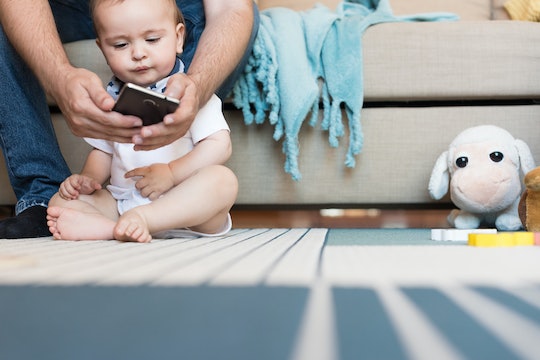 We had our baby's Instagram hashtag within days of my giving birth. I happily logged pictures of my daughter there, though not any breastfeeding or naked bath photos (I had some restraint). My husband and I have a different eye for our daughter, and present her in distinct ways. I think about that when I scroll back through her hashtag and wonder what she will think about the digital life that existed before she had memory. She's coming up on her third birthday, and knows how to get to the Instagram app on my phone and open up videos of herself dancing to MGMT. Tech is about to get much more complicated, and I want to keep her from the world of social media as long as I can. The problem is, according to psychiatrist Dr. Marcia Sirota, who specializes in addiction, I've already taught her lots about social media, quite unwittingly.

"We are imprinting in all kinds of ways" each time we handle our phones or pull out our laptops at the dinner table," Sirota tells Romper. And it's unavoidable. Sirota talks about a pair of tech workers back in the years before smartphones, whose 2-year-old son put his peanut butter sandwich into the floppy disc drive of their computer. "They couldn't be angry at him because he was just mimicking what he had seen mummy and daddy doing," she explains. Now imagine that level of impressionability in the age of Twitter and Facebook.

Linnette Attai, a data privacy expert, helps to educate parents around how they navigate technology with their children, and says that these discussions have to start very young. "If they expect their children not to overshare, they need to model that, too," she tells Romper. "And that can start young with, if the parent wants to post a picture, asking the child if that is OK, and explaining where it will be posted." The crucial thing is to open up that discussion, and begin to set boundaries, she says. And of course, parents need to be aware of the privacy, security, and safety characteristics of each specific platform or website.

Attai and Sirota discuss some of the issues that social media presents for parents and kids in a new episode of Bearing The Motherload, Romper's series that lets real moms debate the niggling challenges we face every day. The episode "Posting Kids' Photos Versus Keeping Them Offline," which you can watch below, sees two moms with different approaches to the dilemma discuss their thinking behind how they use social media on behalf of their kids.

One of the pervasive concerns parents have about social media is its ability to hurt our kids. The link between smartphones, and isolation, depression, and bullying, among other maladies, led The Atlantic to ask, "Have Smartphones Destroyed A Generation?" Sirota explains the difference between the social ups and downs of the pre-smartphone era and today. "[Kids] don’t get a break anymore, and we know that their emotions rise and fall with social media [and] it's critically important to watch that." As an adult, I feel the ill effects of social media myself, and dread the idea of my own child riding that same addictive cycle of gloom. The good news, though, is that deconstructing the online world can help kids manage their use of it.

Sirota teaches parents to have frank discussions about online socializing. "Sometimes kids will connect with other people because accumulating connections or likes or endorsements means popularity, social status," she says. She recommends having conversations where parents sit down with their kids and look at their friend lists to discuss "who you are friends with and why, and what you are sharing and why."

Socializing is hard enough to learn in the "real world" without adding in cyberbullying and anonymity. Social media platforms don't allow users younger than 13 to use their services, but "that doesn't mean 13-year-olds are ready socially," says Sirota. "That magic age of 13 exists because of data privacy laws not because of readiness."

It's tempting to want to simply keep your child from having a smartphone, and to spike the WiFi signal in your house, but the internet has naturally become one of the playgrounds for growing kids to experiment. Where we used to let kids hang out at the mall or playground for hours unsupervised, we now don’t let them out. "There is this pervasive fear for their physical safety," says Sirota, "so generally kids are growing up online out loud — they're not doing anything differently, just out loud." And that means experimenting with friendships, with identity, and with risk-taking.

Thankfully, experts do believe that you can inoculate your children against the harmful effects of digital life to an extent. Parenting in such a way that builds resilient kids can also be protective, says Attai, who founded the PlayWell digital consultancy and works with schools and youth groups on issues regarding technology. She cites the important of free-range play and time outdoors. "When children have higher self-esteem, they are less vulnerable to the predation. They can block people who are being bullies and disengage from those who are making a bag experience."

She says that, beyond having conversations about technology with their children, parents need to simply provide time and space for physical play. "I would recommend that parents take the kids to the park and play on their own and learn social skills and confidence on their own."

And their parents can model the way technology is limited by putting away phones during dinner, and demonstrating moderation.

More Like This
What Is RSV?
The Best Halloween Family Pajamas To Match Your Boos
Prince George Reportedly Got Sassy In A Fight With A Classmate
16 After-School Snacks For Hangry Kids