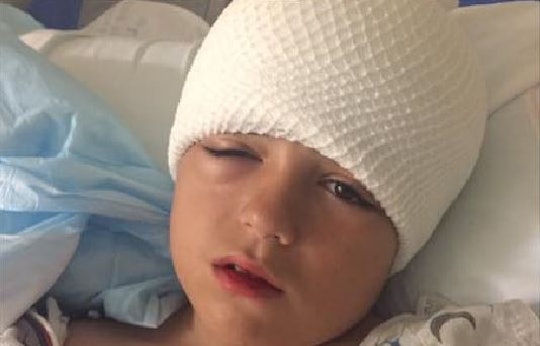 This has to be up there toward the top of the all-time list of a parent's worst nightmares. Ten-year-old Jaden got on his new bike to take it for a spin without a helmet. It didn't fit. It's a split-second decision most parents would have made without a second thought. What happened next should be a scary reminder that helmets are imperative for kids every time they ride.

On April 13, Tiffany Rivera, Jaden's mom, shared her story on Facebook with the hope she could raise awareness for bike safety. Jaden got on his new bike and did what hundreds of other kids do the first time they ride their bikes: he fell. After he shook it off, he told his mom he just scraped his elbow and knee and moved on. Rivera said that, the next morning, Jaden woke up lethargic and with swelling on his right temple. Rivera took him to the hospital, and, after a scan, the doctor told her Jaden had fractured his skull and needed emergency surgery. The doctor only gave his mom a 50-50 chance that Jaden would survive.

After emergency surgery to remove a hematoma and place wire mesh on his skull, months of recovery, and just sheer lukc, Jaden turned 11, with what his mom calls "almost no permanent damage or disability." It seems pretty hard to believe when you look at these pictures, which Rivera wants everyone to see.

And as terrible as Jaden's story is, he's hardly alone. According to the Bicycle Helmet Safety Institute, 48 kids 14 and under were killed in 2013 riding their bikes and more than 66,000 were injured. The Institute found that helmet use cuts head injury by 85 percent. BHSI also wants to remind parents that kids aren't the only ones who need to wear helmets. The average age of a bicyclist injured on roads in the United States is 32.

Rivera is doing her part to raise awareness by sharing her own story. The first picture shows Jaden when they got to the hospital, the images where he's wearing bandages show him immediately after surgery, and then the top right one shows him with 32 staples in his head. The last shows him getting them removed on April 13, 2016.

Parents should all be grateful to this brave mom for sharing her awful story in the hope it will help someone else avoid all this pain and trauma.

"This can happen to anyone," Rivera wrote on Facebook. "The injuries my son has were equal to those in a motorcycle accident!"

Yikes. Helmet hair doesn't seem like such a big deal now, does it?