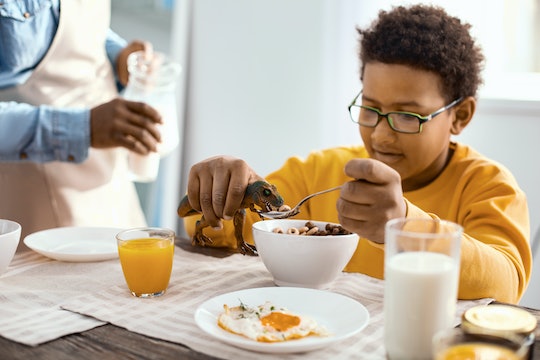 As the mom of picky eaters, I constantly struggle to get my children to eat, and hopefully enjoy, the healthy foods I make. Sometimes I feel as though it's working — I'm getting them to eat new foods, and they seem to love them... until they don't. It can happen in a moment, and as a parent, it's incredibly frustrating to witness your children eschew the foods that you swear they just pounded like a hungry frat boy just a few days ago. Seriously, how do kids suddenly stop eating foods they used to love?

Parents are hyper attuned to the way their children eat, and to us, the patterns in their behavior can read like a Shakespearean sonnet written by a sleepy toddler — it just doesn't make any sense. Psychologist C. Keith Conners wrote in his book, Feeding the Brain: How Foods Affect Children, that it might seem as though the way children respond to foods are random and inconsistent, but usually, there's a reason behind their shifting behaviors. For instance, he wrote that for children, food choice is one of the few things that they control, therefore, if they are in a period of change, like going to a new school or summer camp, food choice might be something stable that they have control over.

My son went through a variety of these food strikes as a toddler and even through elementary school. The biggest one of these flip flops on food loves was probably the end of his years-long love affair with apples. One day he'd eat two or three Jonathan apples in a sitting, and the very next day, he ate zero. It continued for weeks before I tried tempting him with what was before his favorite treat. He simply looked at me and said, "I don't like those anymore." It was a shock to the system. For a long time, it was the one fruit that I could rely on him to eat, and living in New York state (The Big Apple) we were never far from a fruit seller with a huge variety. His feeding therapist at the time told us that he likely just overdid it. His obsession with the fruit had become so great, he'd eaten himself out of it. It's sort of like listening to a song on repeat until you just cannot stand it anymore. Years later, my daughter would do the same thing with fresh pineapple. She once ate so much that it made her sick, and as anyone who has ever experienced food aversion thanks to the stomach flu or morning sickness, you know how hard it is to come back from that.

I spoke to Chrissy Carroll, registered dietitian and blogger at Dairy Free For Baby, and she tells Romper that another possibility is that kids are gaming the system. Those adorable, sneaky little pant-poopers might be tricking you into giving them what they really want. She posits it this way: "Let’s say your child was just introduced to foods that they would naturally have a high affinity for — our taste buds are naturally drawn to sweet foods, so perhaps your little one just started eating cookies. It’s completely normal that they might stop eating a food they previously 'loved' in favor of hoping they’ll get the new food at each meal." I can 100 percent see my daughter doing this for a chance at ice cream or Nutty Buddies.

Other times, Carroll notes that the food strike might be due to anxiety. She says, "If a parent is constantly pressuring a child to eat or making the meal time experience unpleasant, it can become a power struggle. In this case it’s not that the child dislikes the food they used to love, but are trying to exert their own power in the meal time battle." We think we're doing the right thing by "making" them eat, but in reality, we might be turning them against meal time altogether.

Another plausible cause is cited in the nutrition journal Appetite. Researchers made the argument that some of the fault might lay with us as parents (I'll add a dollar to my kids' future therapy fund), but for a different reason. They wrote that it might be due to the monotony in the foods presented — this is similar to my son's apple problem, but more complex. This monotony has to do with an entire group of foods given to the child, and if they're consistently similar, the study stated that the pleasure of eating drops and children might stop eating foods entirely just to get a chance to eat more novel foods.

I know that I often get stuck in meal-planning ruts, and have a tendency to make the same things over and over again because I know they will eat them. But when they suddenly stop eating them, it becomes worrisome, so endeavoring to make food less monotonous makes a lot of sense, even if it's challenging for me. It still leaves the question of how do kids stop eating foods they used to love when they're not absent of novelty?

Carroll says that even though we ultimately place so much of the blame on ourselves, she cautions against self-flagellation. "Though it can be tough, try not to get frustrated or upset by your child’s eating habits. If they’re growing well, you’re doing your job!" Just keep trying, and keep introducing new and novel foods. Hopefully they'll pass the cereal and chicken nugget phase at some point.