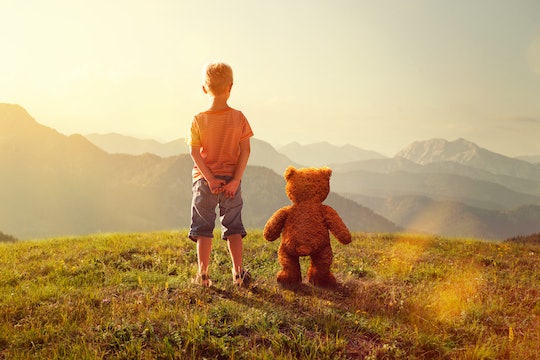 From a fake sibling to a big, hairy, purple monster, imaginary friends have a place in many homes around the world. They help fill idle time and keep kids company as they explore their creativity. But as important as they can be to a young mind's imagination, these unseen pals may be on the decline. A recent study in the United Kingdom found that kids today have fewer imaginary friends than kids did in earlier years. The drop in invented friends has been attributed to increased use of technology by children, raising questions about how technology usage impacts creativity.

In a poll of 2,000 parents in the United Kingdom, conducted by Snazaroo, researchers found that just 17 percent of British children have imaginary friends, according to The Voice. This number reveals a rapid decline since 2001, when a similar study found nearly half of children to have imaginary friends, the publication noted. While seeing a child talking to an invisible buddy may seem worrisome to parents, this sort of imaginary play is actually good for kids.

Michael Dickinson, a Canadian Pediatric Society spokesperson and pediatrician told Today's Parent that imaginary friends are “not a cause for concern." In fact, Dickinson stated that “this can be a routine part of normal childhood development.”

There are mixed results as to how technology affects creativity. What is clear is that increased exposure to technology is changing the way that children think, and not necessarily in a good way. Dr. Jim Taylor posited in an article published in Psychology Today that the internet, and the technology that facilitates it, forced children "into a vastly different environment in which, because distraction is the norm, consistent attention is impossible, imagination is unnecessary, and memory is inhibited." Unlike reading or creative play, Taylor stated that technology has kept children from focusing, exploring, and retaining information.

Additionally, children overall are becoming less creative in recent years. A 2010 study from the College of William and Mary, led by creative researcher Kyung Hee Kim, found that American kids are less able to think creatively and produce unique ideas, according to NBC News. Kim also found modern children to be less humorous, less imaginative, and less able to elaborate on their ideas than their predecessors, the outlet reported in 2011.

Dr. Amanda Gummer, Founder and CEO of Fundamentally Children, told The Voice that the sort of imaginary play involved in imaginary friends is important for child development:

Imaginative play is hugely beneﬁcial for children - being able to transport themselves into make-believe worlds with imaginary characters can help them make sense of their world or provide an escape from it (something that supports good mental health in later life). Suspending reality give children the opportunity to think outside of the box and be as creative as they like, with none of the restrictions that are placed on real life activity.

The drop in creativity and imaginary play does not have to be a life sentence for children. Gummer told the publication that there are a number of ways for parents to foster creativity in their children:

Parents can help children engage in imaginative play by providing them with a balanced play diet and managing the amount of time children spend as passive receivers of digital content. Tools such as face paints, building blocks, dressing up clothes and play dough can help to stimulate this.

While there are a number of benefits to technological experience for children, there are potential drawbacks as well. For this reason, both the American Academy of Pediatrics (AAP) and the White House Task Force on Childhood Obesity recommend that parents keep children younger than 2 years old from screen time as much as possible and limit screen time for older children as well.

All of this is not to say that parents should instantly be concerned if their child doesn't have an unseen companion and that they should keep them away from screens for good. Rather, parents should look for opportunities to encourage creative play and supplement screen time with more hands-on activities. And if your kid does start a conversation with a friend that you can't see, there's no need to worry.