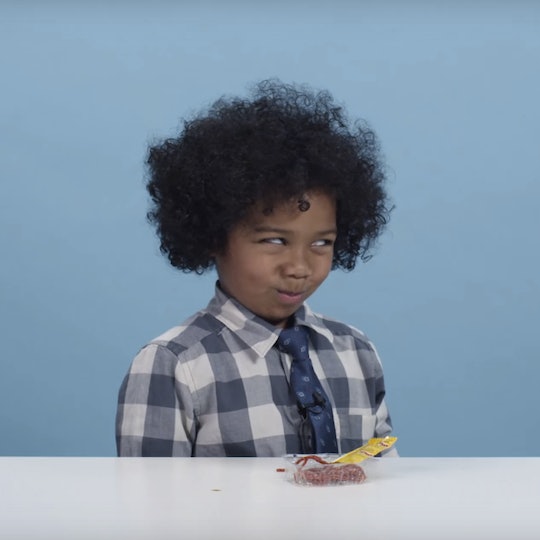 Kids Try Candy From Around The World, And They Have A Lot Of Feelings About It — VIDEO

Kids have about a million different foods they don’t particularly care for, and that list often changes on a daily basis. My daughter, for instance, prefers shell noodle macaroni and cheese some days, and tube noodle macaroni and cheese other days. Because different noodles have completely different tastes, obviously. One thing that is almost universally accepted—nay, adored—by children the world over is candy. Or is it? The folks at Cut Video have gone the distance to show us that not all candy is created equally, in this video of American kids trying candy from all over the world.

I’m not sure what I love most about this video: the hilarious reactions when they are shocked at the taste of the candy they just put in their mouth, or the growing looks of trepidation and distrust as they realize that these candies aren’t what they seem. Apparently “candy” doesn’t always mean “sweet,” as most American kids have grown up to expect. Shattering that myth is simultaneously heartbreaking and gut-busting. Because if you already have children, you are aware of just how dramatic they can be, when they are surprised. And trust me, there is some serious shock and awe going on in this video.

Tamarind is not your typical “sweet and sour” candy base. This poor kid doesn’t know what Tamarind is, but he’s sure to be avoiding it for the next twenty years, thankyouverymuch.

Sometimes you have no idea how a candy makes you feel...

...But you may just be too polite to be honest about it.

Scorched Rice candy from South Korea is rather polarizing...

Some kids absolutely loved the taste of this one, but others? Not so much.

Fizzy candy will blow your mind, every time:

It's clear that fizzy candy need to take a permanent place in these kids' lives, isn't it?

French candy is universally adored, if not entirely understood...

I guess we shouldn't be surprised about this one. I mean, if there's one thing that French are pretty on point with, it's butter, and food involving butter.

Nobody likes black licorice, because really...

You pretty much summed it up, kid. I'm pretty sure you speak for all of us, in this case.

More Like This
From Captions To Gifts, These Are All The Kindergarten Graduation Ideas You Need
Here’s What You Need To Know About That Viral 1960s Baby Formula “Recipe”
Kelly Ripa Loves A Sunday Dinner Date With Her Grown-Up Kids
10 Easy Vegetables To Grow At Home