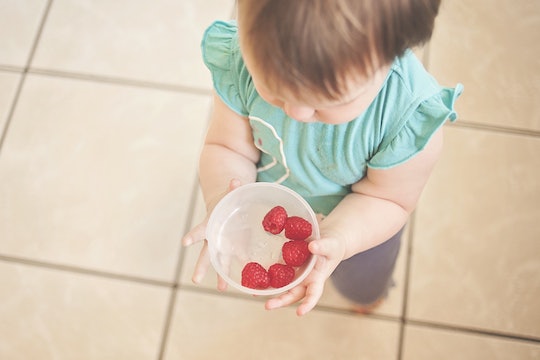 A lot of kids need some convincing when it comes to eating their fruits and veggies. Some kids even prefer a very limited diet, eating just a few types of food and refusing to try anything new. Picking eating isn't uncommon, but it can be frustrating for parents who want their child to have a healthy, balanced diet. New research found that those kids who are picky eaters might keep those habits into adulthood — but is that a reason for parents to worry?

Selective eating is pretty common in toddlers; as babies get older their bodies can tolerate a wider variety of foods, but they can still get overwhelmed by new textures, tastes, and choices. Picky eating throughout childhood (like refusing to eat anything but chicken nuggets for three meals a day) isn't unusual. Kids, like adults, know what foods taste good to them and are certainly more motivated to eat their favorites than they are to try unfamiliar foods that they might not like.

As kids grow up they usually grow out of those picky eating habits and welcome a broader variety of foods into their diet. By adulthood, most of us have figured out that even if we're not a huge fan of certain foods, we need to incorporate them into our diets to stay healthy.

Our tastes tend to evolve as we grow up. Many of us can probably remember hating a food, like broccoli, as a kid only to love it as an adult. But researchers at the Stanford University School of Medicine have found that some kids take their picky eating habits with them into adulthood.

Researchers looked at the lives of 61 young adults who had been enrolled as infants in a study on growth and development at Stanford. During that original study, 10 of the kiddos were labeled as "picky eaters" by their parents. Of those kids, three of them were still exhibiting selective eating habits at the age of 23. Interestingly enough, six of the youth in the study had not been picky eaters as toddlers, but had actually developed the behaviors in their teens.

The researchers looked into whether those selective eaters were more likely to have eating disorders and found that there were no signs that their eating behaviors had any kind of pathology: they were at a stable weight and their "psychopathology" about food (i.e. how they feel or think about it) didn't indicate that their behaviors were like those of eating disordered individuals.

The study didn't correlate any conditions like anxiety or depression with picky eating habits, but they admitted that those outcomes are often a concern for parents. Researchers have always thought that picky eating was just a phase of childhood, but this study implies that for some it becomes a lifelong pattern. Understanding how that could impact longterm health physically and emotionally is something the researchers hope they can follow up on.

Parents and pediatricians often worry that children who eat a very narrow selection of foods are at risk for nutritional deficiencies. But even if a kid only eats a few types of food, as long as those foods are nutritionally rich, they usually do OK if their picky eating is transient. For those who remain picky eaters through adolescence and adulthood, however, the implication for nutrition remains unstudied.