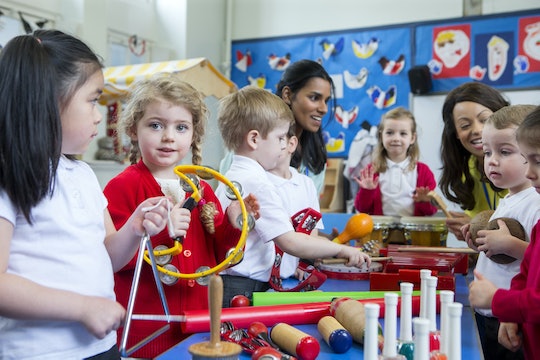 Kids Who Go To Preschool Are More Likely To Get A Degree, Study Shows, But Here's The Problem

A group of researchers have finally finished a 30-year study on the link between attending an intensive early childhood education program and completing a course of higher education. The study, conducted by University of Minnesota researchers, published in JAMA Pediatrics, and reported on by ScienceDaily, concluded that there is in fact a correlation between an early childhood program and obtaining a higher education degree. And while parents who have access to successful preschools for their children may be excited by this information, it's important to note that not every child can afford to attend a good preschool, which is why research like this can only do so much to actually help kids — we need structures that allow more families to access free early childhood education.

Researchers studied more than 1,500 children (who are now adults) from low-income Chicago neighborhoods, beginning in 1983. Of the students, 989 were enrolled in Child-Parent Centers (CPCs), which are early education programs that provide "intensive instruction in reading and math from preschool through third grade as part of a school reform model," according to the study. While the program is offered through third grade, some students only attend it for preschool. The CPC program also offers classes for the children's parents, in subjects including job skills, parenting skills, and education. The other 550 children attended other "childhood intervention programs" in Chicago.

Now, more than 30 years later, researchers checked up on their subjects as part of the Chicago Longitudinal Study — and they found that attending the CPC program had a number of positive effects.

Children in the CPC group were more likely than those in other programs to earn:

Arthur J. Reynolds, a professor at the University of Minnesota Institute of Child Development, the director of the Chicago Longitudinal Study, and the lead author of the study, says the results prove how children from higher economic backgrounds are better set up for success, since their parents can afford to send them to successful early childhood programs. Reynolds said, according to ScienceDaily:

Children from low-income families are less likely to attend college than their higher-income peers ... A strong system of educational and family supports in a child's first decade is an innovative way to improve educational outcomes leading to greater economic well-being. The CPC program provides this.

The other authors of the study added that attending a successful early childhood program can also be related to better health. "Adults with less education are more likely to adopt unhealthy habits like smoking and to experience high blood pressure, obesity, and mental health problems than those who complete more schooling," they said, as per ScienceDaily.

Not only can not attending a successful preschool have negative effects on a child later in life, but it can also put them at a palpable disadvantage as early as kindergarten, according to a 2012 study conducted by the Center on Children and Families at Brookings. The study examined children living in poverty, and found that only 48 percent of children from low-income families are ready for school at age 5, while 75 percent of children from middle- to upper-income families are ready for school at age 5. The study argues that the most promising way to nurture a young child and make sure they are ready for kindergarten is by sending them to preschool. The study reads:

Preschool programs offer the most promise for increasing children’s school readiness, according to a simple simulation that models the effects of three different interventions. Expanding preschool programs for four-year olds has more direct effects on school readiness at age five than either smoking cessation programs during pregnancy or nurse home visiting programs to pregnant women and infants, the two other alternatives considered.

There are many barriers for families when it comes to accessing preschool, though. In addition to economic background, race can play a large role, according to the University of Pittsburgh School of Education. Researchers found that:

Latinx children—the nation’s fastest growing three- and four-year old demographic—are less likely to attend preschool, and for many children of color and children from low-SES households, the quality of early childhood education they receive may be less adequate than the educational experiences of their white and higher-SES peers.

Not to mention, in America, not every state has publicly funded preschool. As of 2016, seven states still do not provide public funded preschool for children, as per a report from the National Institute for Early Education Research, and reported by NPR. And in President Obama's 2013 State of the Union address, he called for preschool access nationwide, according to the New York Times. But even if the United States achieves nationwide preschool access, the Chicago Longitudinal Study is a reminder that not all preschools are created equal. Attending "successful" preschools is linked to greater success later in life, so children from higher-income families are still at an advantage.

The fact that children from lower-income families may have less success later in life because they were not able to afford a prime preschool is a clear injustice. That being said, it's still a great start that 43 states across the country offer public preschools, and hopefully the whole country will soon.

More Like This
13 Is "Too Early" For Kids To Be On Social Media, Surgeon General Cautions
Barbie Honors Aviator “Queen” Bessie Coleman In Their Inspiring Women Line
30 Messages To Write In A Valentine's Day Card For Your Child
The Best Travel Tips For Solo Parenting
What Parents Are Talking About — Delivered Straight To Your Inbox