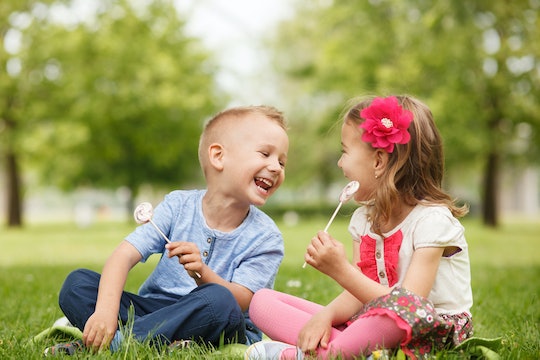 It's a scenario most parents are familiar with: you're in the checkout line and your kid is begging you for the conveniently stocked candy bars or some other junk food they passed in the store. It seems like most parents can unanimously agree that hearing their kids beg for junk food ranks low on the list of things they enjoy. If it seems like kids today are asking for junk more often, there might be some truth to that. According to a new study, kids who spend 30 minutes online every day are more likely to bug their parents for junk food.

Beyond conveniently placing themselves at checkout, candy and other junk food sales have ways of making themselves memorable. Most people can recall one or two junk food mascots from their childhood, like the Chips Ahoy Cookie Guys, Chester Cheetah, or Mr. Owl.

If you're wondering why kids today are begging for junk food so much more, those catchy ads have a lot to do with it.

Researchers from the University of Liverpool and Cancer Research UK teamed up for a study exploring connections between time spent online and eating habits. For the study, they worked with nearly 2,500 kids ages seven to 11 and their parents around the United Kingdom, asking about eating habits and how much screen time kids had (separately from homework).

They found that kids who spent longer than half an hour a day online were almost twice as likely to bug their parents for unhealthy snacks and treats, according to the Daily Pioneer. Children who spent more than three hours online were over four times more likely to spend their own money on junk food compared to those who spent fewer than 30 minutes online, according to the University of Liverpool's report.

One big reason why kids who spend more time online end up wanting junk food is due to ads.

Dr. Jyotsna Vohra, from Cancer Research UK, said, according to the University of Liverpool:

“The evidence suggests that time spent online, where advertising can be prolific, and watching commercial TV increases the likelihood that children will pester for, buy, and eat more unhealthy foods. If they didn’t, then the food industry wouldn’t spend so much on advertising.”

Dr. Emma Boyland, a lead researcher from the University of Liverpool, also said, according to the university:

“Parents are all too familiar with being nagged for sweets and fizzy drinks in the supermarket or corner shop. Our research shows that this behavior can be linked to the amount of time children spend in front of a screen and, as a result, the increased number of enticing adverts they see for these sorts of products.”

So, surfing the web by itself isn't going to make your kids beg for junk. But, continuous exposure to catchy ads in the forms of mascots, songs, or whatever else seems to be much more likely to do it.

This study is a good reminder of how advertisements can impact and shape children's behaviors. It points to a need for some type of change, in order to better protect kids.