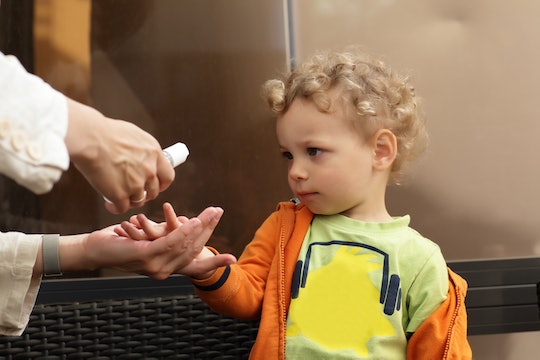 Cold and flu season is upon us, and if you're a parent, then you're likely already familiar with the seemingly endless onslaught of coughing, sneezing, and snot that inevitably accompanies kids in daycare or at school. Kid germs may not ever be entirely avoidable, but since most of us get sick from touching contaminated surfaces, diligent hand washing is an easy and effective way to stay healthy. Regular soap and water is usually considered the best bet, but a new study has found that, actually, kids who use hand sanitizer instead of soap have fewer sick days. So if you're hoping to avoid a winter-time outbreak, it might be time to establish some good home hand sanitizer habits.

For many moms and dads, hand sanitizer is already a diaper bag go-to: kids touch all sorts of disgusting things after all, and since getting to a sink isn't always possible, hand sanitizer is a great soap-and-water alternative. But might it actually work better as a first-line option? Hoping to answer that question, researchers in Spain studied the effectiveness of hand washing methods among children aged 3 and under who were enrolled in daycare. And the results, published in Pediatrics Monday, were pretty valuable: the children who used hand sanitizer had fewer respiratory infections, took less antibiotics, and missed fewer days at daycare overall than the children who didn't.

Although part of being a parent seems to involve just accepting that your young child is going to bring home some nasty germs no matter how hard you try to prevent it, it's also clear that any methods effective at keeping kids healthier are worth a shot. But it's definitely about more than just parental sanity: according to the study, respiratory infections are "the most frequent cause of excessive antibiotic prescriptions in the pediatric population," and since children who attend daycare are more likely to get sick, they're also more likely to be prescribed antibiotics. So not only does it feel awful to have a sick child, it also translates into more doctor visits, more missed days of school (and missed days of work for parents), as well as just contributing to the general spread of illness.

Making things worse? Well, kids get sick a lot. According to KidsHealth.org, it's not unusual for a child to catch eight colds per year or more, and colds are highly contagious — in fact, they're the most common infectious disease in the United States. It's why hand washing is so important in the first place: though respiratory infections can be airborne, they're also often picked up when we touch things, and then, without realizing it, touch our faces. It's also why the Centers for Disease Control refers to hand washing as "a 'do-it-yourself' vaccine," and recommends that everyone get in the habit of thoroughly cleaning their hands regularly.

As much as using hand sanitizer regularly might sound like overkill, parents of young kids may actually want to reconsider using soap and water alone — especially because a quick wash at the sink isn't necessarily enough to ensure germ removal. To be truly effective, both kids and adults should wet their hands, lather them with soap (including the backs, between fingers, and under fingernails) and then scrub for at least 20 seconds — roughly the length of two rounds of "Happy Birthday" — before rinsing and drying, according to the CDC. In that sense, an alcohol-based hand sanitizer also seems like it might be easier to use properly: all you have to do is rub the sanitizer on your hands and let it dry.

To be clear though, using hand sanitizer isn't completely without risk. During the study, one child dropped out due to "worsening of localized atopic dermatitis due to hand sanitizer gel use," and even without any reaction, alcohol-based hand sanitizer can be drying on skin, and can cause any cuts or scrapes on fingers and hands to sting (not fun for little ones). And then there's also the fact that, unlike soap, hand sanitizer needs to be supervised closely — according to CNN, kids who ingest even small amounts of hand sanitizer can be at risk for alcohol poisoning, and scented hand sanitizer products can seem especially appealing to young children.

Overall the study's findings will likely be pretty useful for parents looking to take steps to reduce the number of sick days they and their children will have to take this winter. And given that using hand sanitizer is a pretty inexpensive and simple intervention, it certainly seems worth a try.