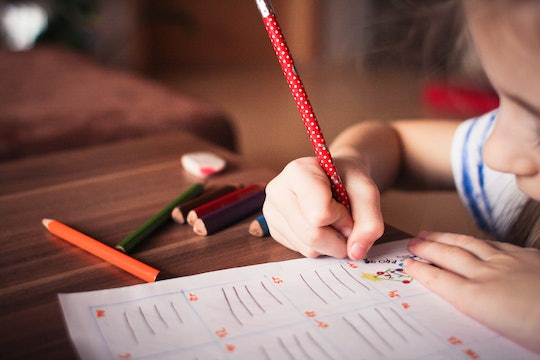 Kids With Disabilities Don't Have Access To Quality Education, & The Reason Is Infuriating

When it comes to special education in the United States, federal law dictates that children with disabilities should have the same access to free, public education as all American children do. However, a new report published by the Hechinger Report this week shows that some kids with disabilities are denied access to quality education — and the reason behind the disparity is not only infuriating, but highlights a broader racial gap in the American education system.

And that's only the nationwide average: in some states, the gap becomes much wider. In Wisconsin, for instance, only 53 percent of black students with special needs graduate with traditional diplomas, while 84 percent of white students receiving special education do the same. It's a stunning — and scary — racial gap.

The problem, according to HuffPost, is caused by several issues. First of all, the Individuals with Disabilities Education Act is a federal law that's meant to ensure that handicapped children have access to public education and additional related services (including individualized learning plans to help them get to certain goals). The problem, however, is that the federal government never actually provided 40 percent of the IDEA funding that it was meant to, and today, according to The Atlantic, it only funds 16 percent of special education costs.

That means schools have to pick up the slack, in a time when many school budgets continue to shrink. Many poorer school districts have more black and Hispanic students, which helps explain the racial gap in special education — but even in individual school districts, where funding is equal, the problem persists.

According to Paul Morgan, a professor of education at Pennsylvania State University, told HuffPost that parents' ability to advocate for their children comes into play, as well, saying:

These services are often difficult to secure, they’re expensive and schools don’t necessarily want to provide them. So it’s parents who are better-resourced, in terms of information and social networks and time, that are able to persist and go through the legal wrangling sometimes necessary to get what they need.

Parents who cannot take time off work to advocate for their children full-time — or simply don't know that their children aren't receiving the education they are legally entitled to — can get the shorter end of the stick.

Earlier this year, the Supreme Court ruled in favor of students enrolled in special education programs, arguing that they deserve more than an alternative program and an alternative diploma. "When all is said and done, a student offered an educational program providing ‘merely more than de minimis’ progress from year to year can hardly be said to have been offered an education at all," Chief Justice John G. Roberts Jr. wrote in a Supreme Court opinion at the time, according to The Washington Post, continuing:

For children with disabilities, receiving instruction that aims so low would be tantamount to sitting idly . . . awaiting the time when they were old enough to “drop out.”

There's a lot of work that needs to be done before the United States sees the gap in special education graduation rates close. But in the meantime, parents should absolutely know that the gap exists — and that the law is definitely on their side when they fight for their child's right to a quality education.