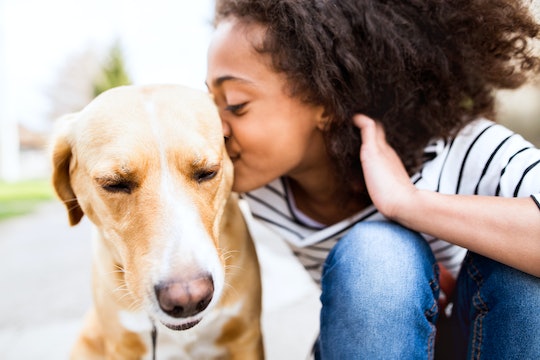 Dogs Are Great For Kids For A Really Cool Reason, New Study Shows

While I'm a self-proclaimed crazy cat lady, I still love spending time with dogs. Given their wet noses and generally sunny disposition, who doesn't? But fluffy tails and games of fetch aren't the only reasons to love the "good boys" of the world, and to consider . Kids with dogs may have healthier human relationships, according to one recent study. Researchers found that children who are securely bonded with their dogs are more likely to have strong relationships with the important people in their lives.

The study, led by Kathryn Kerns, a psychology professor at Kent State, did not determine if a child's bond with his or her dog made human relationships easier, or vice versa. It was unclear if dogs or humans taught the children to form stronger bonds, according to First For Women. However, it was discovered that children who had more physical contact with their dogs were closer with their mothers — though not always with their fathers or close friends.

Kerns explained to the Post that this could be because of the traditional mother-child dynamic:

Given that mothers play a bit more of a role as a safe haven, as the one to go to for comfort, than dad, perhaps that’s why we found that effect. The close relationship with the mother might be more of a model for closeness with others, including the dog.

While this study is unique, it isn't the first to suggest that animals positively impact children. Animals, dogs included, help children learn to socialize and increase their verbal skills, according to NPR. Young children attempt to talk with their pets, and pets provide them with cognitive language skill support and stimuli. Additionally, pets are therapeutic for children by helping to lower their blood pressure, speed up recovery time, and reduce stress and anxiety, according to HuffPost. These benefits are amplified in children with behavioral problems or autism.

Having pets can also help teach children about empathy, as the animals are dependent on its owners, HuffPost reported. Kids learn to read and respond to pets' needs, such as when they need to go outside and use the restroom or require comforting when scared during a thunderstorm. Bullies often lack empathy, so that skill really pays off.

Along with their study on relationships, Kerns and her teams of researchers also conducted a study on how dogs impact children's emotions during stressful events. The same group of children were asked to recite five-minute-long speeches which would be both watched live and videotaped. The speeches were meant to cause the children stress. Half of the participants had their dogs in the room, while the other half did not.

Kerns told the Post that kids with their dogs nearby were much happier and calmer. Children were even calmer when they had physical contact with the dogs during their recitation. “When people are around pets and petting them, oftentimes they just feel calmer inside,” Kerns said.

If your family doesn't currently have a dog, Kerns isn't recommending that you run out and get one immediately. Dogs are a big responsibility and parents should weigh the pros and cons before adding one to their family. Instead, if you do have a dog, she recommends that you make the most of it: have your dog around when you announce big news, suggest that your child help to care for family pets, etc. Your child (and your dog!) will thank you for it.