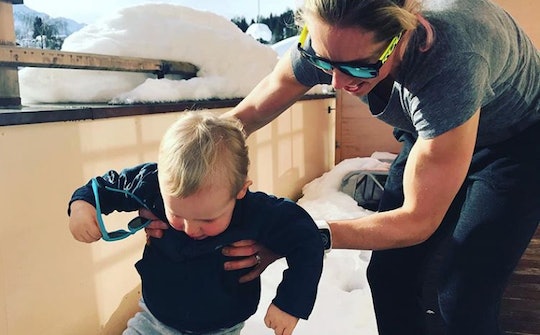 “There Is More We Can Do”: Olympian Kikkan Randall Opens Up About Postpartum

The advice for five-time Olympian, World Cup champion nordic skier, and mom Kikkan Randall following the birth of her son was to "take it easy" for six weeks, then come in for a checkup. "And I ended up injuring my back about a month after my son was born just getting up out of a chair," she tells Romper.

A friend, who happened to be a physiotherapist specializing in postpartum issues did an assessment and found that Randall wasn't using her internal muscles. "The load of just picking up an 8-pound bag of flour and carrying it around all the time was really doing a number on my back and hips," she says, so she turned to Pilates to rebuild her core strength. The experience revealed a real lapse in postpartum healthcare. "I was a person who was asking my doctors, 'What can I do, what can I do, I want to get back [to training],' and no one had said anything about it," she explains.

In a heavy week of training, Randall, 35, puts in anywhere from 22 to 25 hours of training, which means hill sprints, weight training, roller-skiing, 4-hour distance runs, and of course drills to hone her technique on nordic trails in her home state of Alaska, or in Europe, where the bulk of nordic events take place. An "easy" week of training comprised 19 or 20 hours training going into the PyeongChang Olympics for the mother of a now-toddler, who plans to retire after the Games. She spoke to Romper about the highs and lows of motherhood, training while pregnant, and the gap in postpartum support prior to flying to South Korea, where she will compete in the 5-kilometer women's relay, in which the U.S. is expected to field a strong team.

"I think there's a really big opportunity to promote that part of the post-birth process," Randall says from Austria, noting that in France, new mothers are given 10 weeks of physical therapy to rehabilitate their bodies. "There is so much work that can be done in that [first] six weeks to help out."

With a toddler, as soon as I walk in the door, he's excited to see me, I'm excited to see him, and often I'll realize two hours later, I'm still in my training clothes.

As the most successful U.S. women's cross-country skier in history, Randall has long been a role model for children, but since planning a pregnancy in between the Sochi and Pyeongchang Olympics, has emerged as a role model for mothers, too, navigating competitive sports as a pregnant athlete and then mom. Top of her mind a week out from the opening ceremony is the challenge of spending a month away from her toddler, Breck.

"He is having a ball," she says of keeping in touch via FaceTime while her son stays with his grandparents. It helps, she says "knowing that I can really focus on my recovering and training and everything," but "I'm going to miss him like crazy, I already miss him."

She is an Olympian, yes, but the balancing act inherent to parenting a toddler sounds very familiar. Randall is not immune to mom-guilt, noting that she will often neglect herself in the recovery phase post-workout.

"I used to have all the time in the world to get done with the workout, get home, change clothes, eat, lay down," she says, "and now with a toddler, as soon as I walk in the door, he's excited to see me, I'm excited to see him, and often I'll realize two hours later, I'm still in my training clothes."

A few of those women had their babies four or five months ahead of me, and so to see them come back successfully definitely helped my confidence that I would make it back.

The wider conversation about how to support working mothers is also taking place in the cross-country skiing world. Randall was one of a handful of World Cup athletes who planned a kind of baby boom prior to Pyeongchang, and has stayed close with Finland's Aino-Kaisa Saarinen and Norway's Marit Bjorgen, a six-time Olympic champion, through their pregnancies and into motherhood, planning family training camps and getting their babies together on the World Cup circuit.

"A few of those women had their babies four or five months ahead of me, and so to see them come back successfully definitely helped my confidence that I would make it back," Randall says. "It was really clear around the 10-month mark [postpartum] that things really kicked in and I experienced the same thing. It was cool camaraderie to have."

By the same token, Randall will hear from other moms, "Hey it's so encouraging to see you could stay active, it's so awesome to hear that you stayed strong, it's great to hear about the challenges." She has tried to be open about her journey, sharing highs and lows on her Instagram and Twitter accounts. She feels the pull to devote her time to her son, she says, sometimes to the detriment of her own recovery time. "I realized maybe I don't need to be as fixated on those details, like sometimes I think I let them get to my head."

This will be Randall's final Olympics, and she is currently running for the IOC Athletes' Commission, having worked as an athletes' representation on the Federation Internationale de Ski (FIS). "I really believe in strengthening the Olympic movement," she says." The election for the IOC will occur during the games.

She is also looking forward to ratcheting up her work leading Fast and Female, a nonprofit devoted to encouraging girls' participation in sports.

But her retirement will also represent a pivot for her family. They will be relocating from Alaska to British Columbia where her (extremely supportive, she notes) husband Jeff Ellis has taken a new job. Randall is looking forward to "be able to spend unrestricted time on my family," she says.

Seeing Randall on Instagram towing her son in a sled around the nordic trails, or hiking him along ridge lines in a back carrier, or running trails with other athlete mothers gives, well, a punch of adrenaline to mothers who wonder if they can find their bodies again, or find that freedom and activity while caring for a small child.

And Randall sees herself as very much an ordinary human. At speaking events, she will often tell kids, "Olympic athletes aren't super heroes born out of some dinosaur egg somewhere, we grew up regular kids doing this stuff, having dreams." She believes that teaching kids to create roadmaps to achieve their dreams is important — it's solid advice many moms could use, too.

More Like This
Covid Vaccine “Deserts” For Kids Under 5 Make It Almost Impossible For Parents To Find Shots
Diastasis Recti Exercises You Can Do At Home To Heal Your Abdomen
When Does A Baby Recognize Their Father? A Pediatrician Explains
Cradle Cap Is Normal & So Is Your Desire To Get Rid Of It. Here’s How
What Parents Are Talking About — Delivered Straight To Your Inbox