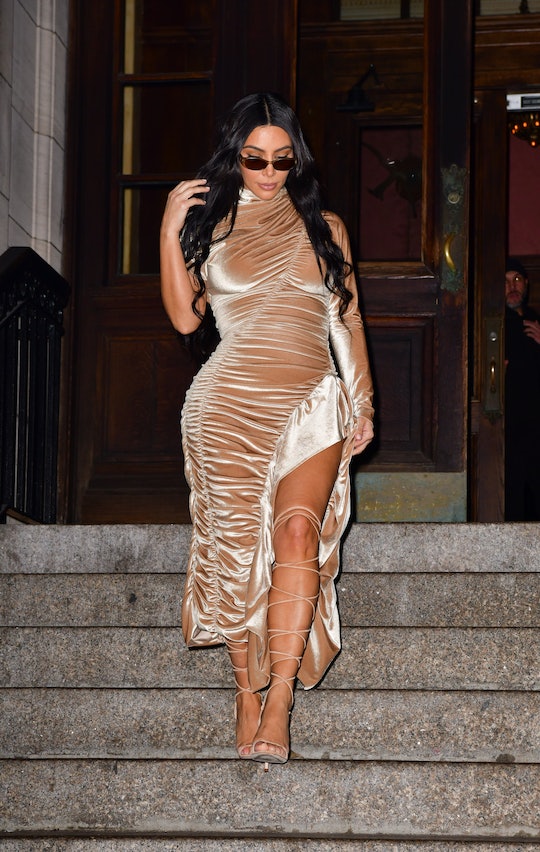 Kim Kardashian's Dress Is Eerily Similar To Her Wrapping Paper

Although the entire Kardashian clan is well-known for going all out for the holidays, it seems that one member of the famous reality TV family has really taken things to another level this year. Kim Kardashian West stepped out in New York on Sunday in a look that felt eerily familiar to anyone who saw the unique way the reality TV star had chosen to wrap her family's Christmas gifts. In fact, it appeared as though Kim Kardashian coordinated her dress with her wrapping paper to continue her "creamy velvet" holiday trend.

Just two days after showing the world she'd elected to wrap her family's Christmas gifts in swaths of cream-colored velvet, Kardashian stepped out in a similarly-colored velvet gown for the New York City premier of her husband's opera, Mary. Paired with strappy, nude gladiator-style heels, the gown featured a turtleneck, a thigh-high ruffled slit, asymmetrical ruching, and just one long sleeve. But while fashion writers at Vogue have described the dress as having "just the right amount of opulence," others felt it bore a striking resemblance to Kardashian's recent choice of gift wrap.

In a series of snaps shared to Instagram, the reality TV star recently revealed that, this year, her family had decided to forgo more traditional printed wrapping paper in festive hues and patterns. Instead, they'd wrapped all of their Christmas presents in what she called "creamy velvet" fabric, opting for a more neutral and minimalistic holiday palette.

"West holiday wrapping this year!" Harper's Bazaar reported Kardashian wrote in a series of posts shared to Instagram Stories over the weekend. "Each year every family member picks a color and vibe so we know who the gifts are from. This year we chose creamy velvet."

That's right, while other families may wrap their holiday gifts in brightly-colored paper printed with festive winter scenes or pictures of snowflakes, snowmen, reindeer, and Santa Claus, the Kardashian-West family has opted for plain cream-colored velvet. Photos shared by Kardashian showed packages of various sizes neatly enclosed in knotted pieces of velvet fabric and lacking any other adornments such as bows, ribbon, or name tags.

Or course, while many have criticized the Kardashian-West family's 2019 holiday wrapping for being bland, its neutral-tone appears to fit in well with the rest of the family's colorless holiday decorations. According to Cosmopolitan magazine, Kardashian's Christmas decorations include an illuminated all-white tree and giant all-white fabric trees.