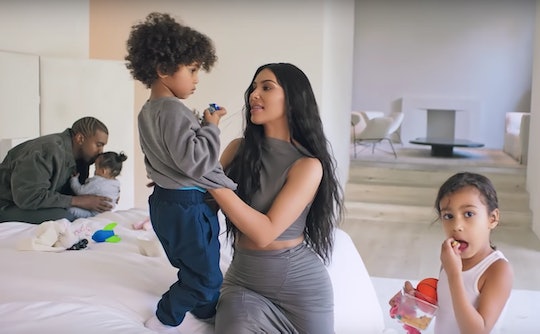 Baby fever is hitting a pitch at the Kardashian-West household, and soon our favorite rapper and reality TV mogul couple will be welcoming their fourth baby into the family. And in her latest interview with Vogue's "73 Questions," Kim Kardashian dropped a baby name hint, so you can eliminate a few predictions off your list.

A day after her first solo cover of Vogue debuted, Kardashian-West was featured in the magazine's famous "73 Questions" interview. She was accompanied, endearingly, by her husband Kanye West, and all three of her children made a rare appearance as well. It's one of the only times the world has gotten to see the entire family interacting together, given that they don't show too much of the kids — or Kanye — on the family's E! reality show.

In the interview, Kardashian-West said that she and her family aren't quite ready for the new baby, as the nursery isn't prepared, and they're "stressing" a bit. (USA Today reported her gestational carrier is due in the next few weeks) and that they haven't quite chosen a name yet.

However, they do know what the name won't be: another direction. As in, the baby definitely won't be South West or East West, just like sister North West.

Kardashian-West went on to say that her son, Saint, wants the new baby to be named "Saint," too, after himself. (Kanye's son, for sure.)

And as for anyone who criticized the choice of "North?" Well, Kardashian said that Vogue Editor-in-Chief Anna Wintour told her it was "genius" when she heard it, so she actually played a role in selecting her first child's name. As for whether or not she's had input this time? Hard to say.

It's not the first time the Wests have made their baby-naming decisions public. In fact, according to People, just a few weeks ago, Kardashian-West said that she was seriously considering naming the baby "Rob" after her dad and brother. “I was Googling Armenian boys’ names last night, and I couldn’t really find anything,” she told Jimmy Kimmel on Jimmy Kimmel Live! in Las Vegas.

Other than enlightening us on not quite having a name yet, Kardashian-West also disclosed in her Vogue interview that right now, Saint is very into Paw Patrol, North is very into Bill Nye the Science Guy, and Chicago is very into "food." (Same.) And she said that the most rewarding part of being a mom is when the kids "tell you they love you," and that the most important things he learned from her parents is: "family is everything."

Kardashian-West also explained that parenting is a lot of "winging it," and that she and her sisters have a group chat in which they exchange parenting advice. Kardashian also said she wants her kids to be "kind," and to "treat everyone the same way." Of course, she answered all of these questions while juggling her toddlers, and TBH, it was extremely cute. "My kids have taught me how to be patient, and what's important in life," she added. "And Fortnite."

In her Vogue cover story interview — in which she disclosed for the first time that she's studying to become a lawyer — Kardashian said she has a newfound confidence, as a mother, parent, and public figure. “I love to be put in a situation where I can have a conversation with someone who might not be inclined to think much of me, because I can guarantee they will have a different opinion and understand what’s important to me after they’ve met me," she told the magazine.

With just weeks (or even days) away from the fourth, and likely final, Kardashian-West baby joining the family, you don't have long to wait to see what the name does end up being. However, it's safe to say it will be something wholly unique, because Kimye would not have it any other way.