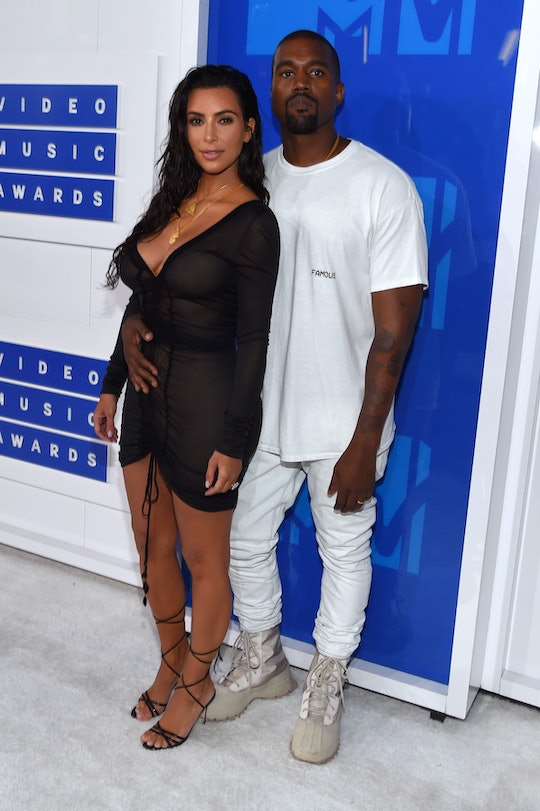 Kim Kardashian and husband Kanye West are currently expecting a fourth child through a surrogate. But they're keeping this pregnancy a bit more under the radar than they have with her other pregnancies — which is so understandable. But, fans will probably love that Kim Kardashian gave an update on baby number four because it's a super exciting update.

In a new interview with The New York Times this weekend, Kardashian had a very telling update about baby number four — their fourth child is due in two months, Kardashian told the outlet. In the interview, she noted that their son will be arriving in May, which means she is (understandably) excitedly preparing for their arrival.

"I'm frantically trying to get their room ready," Kardashian said in the interview. "It's madness, but it's the best madness."

Anyone can understand why her house might be madness at this moment. Kardashian and West are the parents to three young children — 5-year-old daughter North, 3-year-old son Saint, and 1-year-old daughter Chicago, who they welcomed through a surrogate last year, as The Sun noted.

With so many young children running around the house, on top of preparing for their newest child's arrival, it's probably a lot for the family to keep up with. But, as Kardashian stated, it's a madness that she can handle and welcomes with open arms.

This chaos could also explain why Kardashian hasn't said much about her baby's arrival at all. In January, Kardashian confirmed on Bravo's Watch What Happens Live with Andy Cohen that she was expecting through a surrogate. While on the show, she confirmed that they are having a boy and claimed that she started telling people at her family's annual Christmas party, according to USA Today.

A few weeks later, in February, she appeared on The Tonight Show with Jimmy Fallon and said that she was a little afraid to make the decision to have four kids, according to People.

"I was kind of stressing," she said on the show. "My house is so full [but] I heard that parents of four are the most enlightened and calm of parents."

And since she is just a little stressed out right now about the arrival of her fourth child, she is probably looking forward to that moment of calmness and peace. But once her child arrives, there is also another thing she has to worry about — making sure that all of her kids get along.

During an appearance on the podcast, Pretty Big Deal, in October 2018, Kardashian said that her oldest daughter was begging her to have a little boy, just so her younger brother could leave her alone, according to People.

"North acts like an only child at times," Kardashian said on the podcast episode. "I think she's a little confused. She's beyond jealousy now. She's just like, 'It's my world.' She said to me the other day, 'Mom ... we just need to have another baby brother so that Saint can leave me alone ... so the girls can be on one side of the house and the boys can be on that side of the house."

North will have her wish granted soon enough when their newest addition to the family arrives within a matter of weeks.