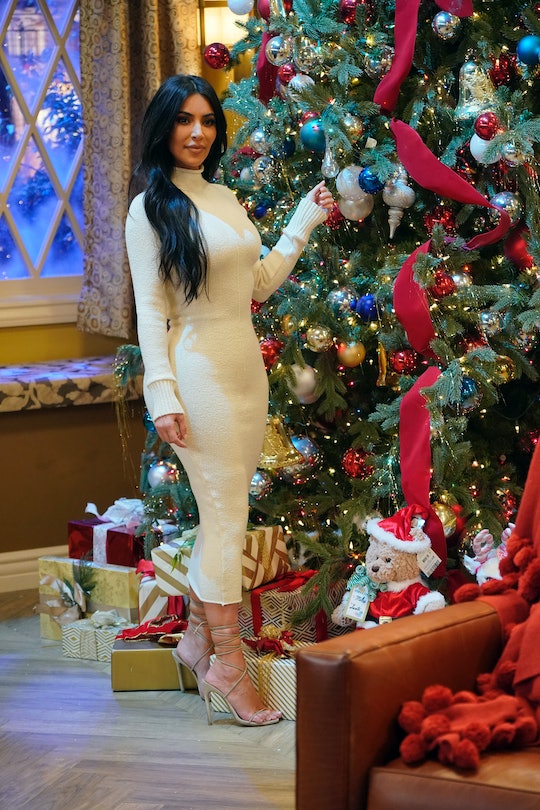 Kim K. Had A Relatable Mom Moment When She Had To Photoshop Her Fam's Christmas Card

As much as I love a fridge plastered with those sweet family photo Christmas cards, my mom-stinct tells me that what happened behind the scenes of the featured photos was less than picturesque. Meltdowns, wardrobe malfunctions, and forced faces of holiday cheer are par for the course. Proving my point in a big way, Kim Kardashian admitted that she had to photoshop her family's Christmas card to get all of her kids in it smiling and presentable — perhaps her most relatable mom moment of all time.

With four kids under the age of 7, wrangling the family into a pose worthy of the stars is quite the feat; even for the likes of Kim K. When faced with an uncooperative eldest child, Kardashian made the decision that honestly makes the most sense to me: leave the kiddo out of the photo if she hates it so much (insert shrug emoji here). But, kids are fickle creatures, and Kardashian's oldest daughter North West decided shortly thereafter that she did want to be in the photo. Sigh.

Ever the accommodating mom, Kardashian did what she could to help her little girl feel included. Speaking on The Ellen DeGeneres Show on Tuesday, Kardashian explained to the host how the whole thing went down and resulted in the stunning Christmas card photo that she shared to Instagram on Friday.

“It’s the most anxiety to get four kids together smiling in a room,” Kardashian told DeGeneres. “North was having a day, so she refused to be in the shoot. She just was crying because she wanted her specific hairstyle, whatever.” So, she cut North out to make life easier.

Fortunately, the photographer who took the group shot was still in town and able to come and do some patch work. “[North] said, ‘I just want a photoshoot with just you.’ So I said ‘Perfect,’ I called the photographer, had her come over. I said, ‘I have no makeup on now, I look totally different. Let’s just pretend — shoot us, but cut me out and you’ll photoshop her in.’ And it looks like a beautiful card.”

If she could go back in time and do it all over again, she would've gone the photoshop route in the first place. Girl, same. “I would’ve rather done it this way than the anxiety of what I went through of trying to get — I mean, Chicago has a cookie in her hand, I was really holding Psalm there, Saint was really there. The rest of us were there, but North … that was a lot,” she said. “There’s always one!”

In the same appearance, Kardashian talked about another relatable mental health break that she's giving herself this year: not trying to get the entire extended family together in time to take the famous group shot. “First of all, it was just a time thing,” she explained to DeGeneres. “It was just a time thing of why I couldn’t wrangle everybody and I was like, ‘This isn’t my job. I’m not gonna sit here and try to get everyone to do a card. I’m gonna do one with my kids and my husband and my family.’ And even that was so dramatic.”

With her lavish lifestyle and celebrity status, there aren't many times that I've felt like a kindred spirit with Kim K. But there's nothing like the holidays and frustration with your kids' meltdowns to bring us all together.