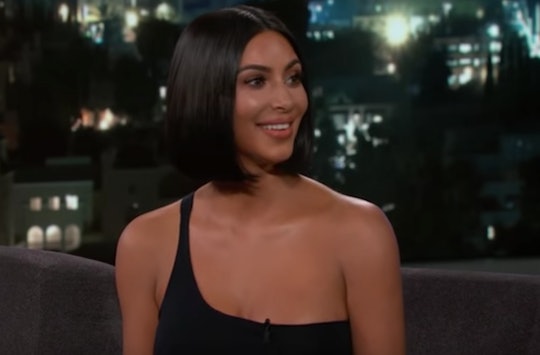 In today's political landscape, some people are working extra hard to question and confront the politics of those in their lives. Celebrities have not escaped this type of critique, as fans struggle to understand their positions and it seems Kim Kardashian is next on the list. That's because, in a recent interview, Kim Kardashian said she has "nothing bad to say" about President Donald Trump, but Twitter is not here for it.

On July 30, Kardashian appeared on Jimmy Kimmel Live!, where she took time to share her experience successfully lobbying the president to pardon Alice Marie Johnson. According to CNN, Kardashian connected with Johnson, who served 22 years of a lifetime sentence for a first-time nonviolent drug offense, after finding her story on Twitter. It was this connection that led Kardashian to secure a meeting at the Oval Office.

It was a move that came under massive criticism. Although Kardashian's interest in the case is nice on the surface, many were not entirely trusting of the move following Kanye West's tweets about Trump, as ELLE reported. And it was while discussing her husband's political views with Jimmy Kimmel that Kardashian said, "I have nothing bad to say about the president. You know, he's done something amazing."

She went on to add in the same interview, "I don't agree with everything either. I had no idea what to expect going in there and I was like, 'Look, I'm going to be focused.' It really turned my idea around in this category."

Romper's request for comment from Kardashian's reps was not immediately returned.

This is not the first time Kardashian has spoken about her views on Trump. In a June 2018 interview with The Hollywood Reporter, the outlet reported Kardashian said:

I try to see all sides, especially after this experience [referring to the controversy over her visit to the White House]. There’s obviously a lot that we don’t agree with, but I want him [President Trump] to win. I want him to succeed, because it’s our country. It’s so crazy that everyone doesn’t want that.

Although Kardashian claims staying on Trump's good side is simply a longer political strategy, regardless of how it impacts her public image, many people on Twitter are not impressed with her comments on Jimmy Kimmel Live!.

"Imagine having nothing bad to say about a guy who's been dividing our country from day 1," Bachelor in Paradise alum DeMario Jackson wrote.

Some users also mentioned Kardashian's explanation of her husband's support for Trump. One wrote, "she said something interesting (that I've heard before)...uneducated, patriarchal voters are the easiest prey for strongmen types."

The criticisms may seem harsh, but they are not entirely unfounded. "Kim’s rejection of public criticism for the president on Kimmel is a missed opportunity, perhaps purposefully so, with dangerous implications," noted a Teen Vogue article on the issue.

In past episodes of Keeping Up With the Kardashians, the shows has included political moments. An October 2017 segment, as noted by Teen Vogue, showed Kim and Khloé Kardashian spending time at a California Planned Parenthood. That experience, they said, was profound and influenced their understanding of women's reproductive health needs and the ongoing fights against the organization.

It's important to remember these political moments, because it shows where Kardashian's current silence is at odds with her past statements. Picking silent complacency as a political tactic is never OK. Some may wonder why celebrities are being looked to in this political climate, but it is because they have been given platforms that most people do not have access to. It's important for celebrities to utilize those platforms.

Kardashian is not the first celebrity to face questions about her politics and she will not be the last. Moving forward, it will be interesting to see if Kardashian maintains her current position around Trump.