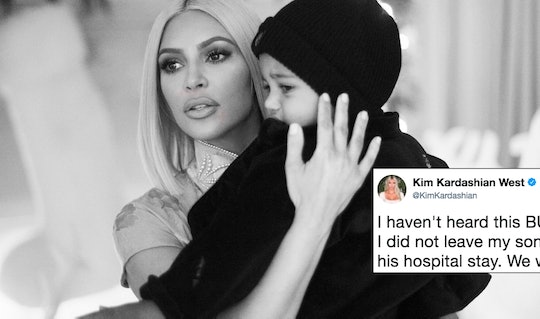 Rumors can hurt and celebrities are definitely not immune to that. And you might think that saying things about people online, like Kim Kardashian who has millions of followers, might not get back to them. But when they do get back to them, these things can hurt. Like on Wednesday, when Kardashian hit back at people accusing her of leaving Saint during his recent hospital stay and her words are so important for her own story.

Kardashian revealed on Instagram, on Tuesday, that her new year got off to a rocky start; her son, Saint, had been in the hospital days before 2018 started. Kardashian took to social media to thank the doctors who helped her and her son. Kardashian said in the post:

My precious baby boy is so strong! After spending three nights in the hospital and seeing my baby get multiple IV's and hooked up to oxygen machines, our end of year was challenging. Pneumonia is so scary. I want to thank every nurse and doctor out there who works so hard around the clock. We are so grateful for you all!

Kardashian's spokesperson told CNN that Saint had been "hospitalized from Wednesday to Saturday." Regardless of Kardashian telling her fans about her son's time in the hospital, people had apparently been speculating on Twitter that Kardashian and her husband, Kanye West, were "partying" on New Year's Eve. But Kardashian quickly shut those rumors down on Wednesday.

Kardashian came to her own defense towards people who claimed that she had partied over the weekend or was not concerned about her son's health. Kardashian said in a tweet:

I did not leave my son for one minute during his hospital stay. We were there Wednesday night to Saturday. NYE was Sunday night. People came over when he was already asleep for the night. Don't even try me when it comes to my kids.

Nothing like a fierce mother to come to the defense of herself and her children — because no one should really ever accuse a parent of doing something they weren't witness to.

Ringing in the New Year with friends and family. Celebrating the New Year by having a game night and staying in, cooking.

Kardashian snapchatted bits from New Year's Eve where she threw a party with friends and family members according to E! News, and even snapchatted a late night kiss with West. In a Snapchat video from the evening, Kardashian, West, and their daughter, North, along with their friends and family members can be seen in the video ringing in the new year. The party and celebration seems super wholesome and not like a major celebration that people on Twitter were alluding to. Parents know that taking care of a sick child, especially a child in the hospital, is super tiring and doesn't tend to inspire people to go out and party.

But Kardashian shouldn't have to explain herself to anyone. It is clear from her Snapchats that Kardashian spent the evening at home with her family and loved ones — and there is no evidence of her leaving home to go out to party. It's silly that she would have to defend herself to people who would say otherwise, but this is a reality for her. Fans of Kardashian already know that Kardashian is a loving, devoted mother to her two (and soon-to-be three) children.

A lesson should be learned here — don't mess with Kim Kardashian when it comes to her kids.