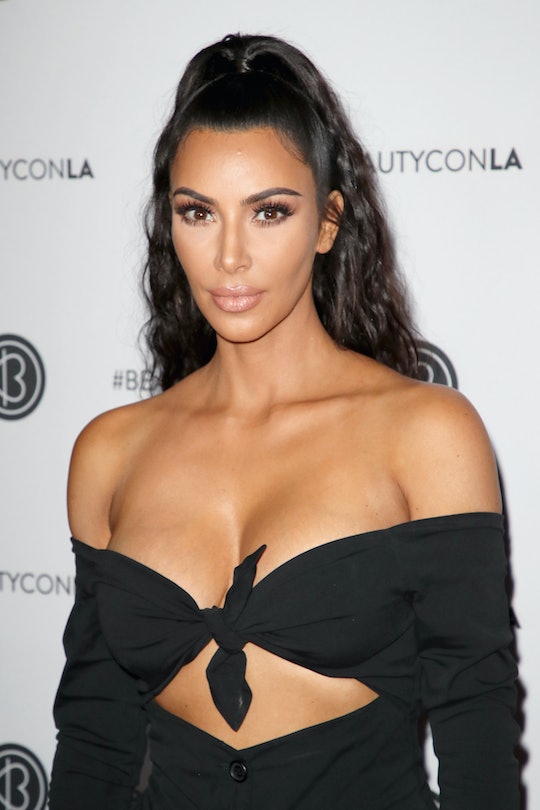 Mom-of-three Kim Kardashian has pretty much made her fortune off of her looks, and her famous, internet-breaking booty, so it's not even sort of surprising that the Keeping Up With The Kardashians star takes her appearance very seriously. But in a series of videos in an Instagram story Sunday, Kim's sisters, Khloé Kardashian and Kendall Jenner, couldn't help but comment on how thin she'd become, leading the reality star to yelp with glee. But while Kim Kardashian is thrilled her sisters think she's skinny, those on social media clearly felt very differently. Between Kendall jokingly commenting, "I'm really concerned, I don't think you're eating," and Khloé remarking that Kim's waist is "anorexic" and her arms are "pin thin," Twitter users couldn't help but voice their frustration over the body-shaming messages the sisters were sharing — especially since there are so many young girls who watch them.

Kim joined her two sisters at the City of Hope charity poker event Sunday night, according to People, and judging by their behind-the-scenes commentary, it sounds like Kendall and Khloé thought Kim was looking quite different than usual. After quipping that she must not be eating, Kendall told Kim she "[looked] so skinny," Kim responded, "WHAT? Oh my God, thank you!" at which point, Khloé chimed in to say, "I’ve never seen a human being look so good. What's Face Tune? You are a walking Face Tune doll."

In the next clip, Khloé said that, while Kendall might be naturally skinnier than Kim, it's really Kim who should get the credit, because "it takes work to look like [Kim does], and that's amazing." As for Khloé? The new mom, who recently shared on Twitter that she's "still working on" getting her pre-baby body back, stood in front of a picture on the wall of a doughnut and joked, "this is the story of my life, right here. I'm a doughnut hole."

But the part that was perhaps the most concerning? Kim later insisted she wasn't "that skinny," adding, "I'm 119 pounds," to which Khloé replied, "that's because you're muscle." Kim's response? "I will say when I take out my hair extensions I am less."

Khloé and Kendall are clearly trying to offer their sister some encouraging compliments in the video clips, and they're obviously meant to be well-intentioned (and probably tongue-in-cheek). But listening to Kim derive so much joy from the comments — and then try to suggest after the fact that somehow 119 pounds isn't "that skinny" — just kind of gives me the creeps. And I definitely don't appear to be the only one.

On Twitter, users spoke up to say how awful the whole thing felt:

While others made a point to emphasize that joking about being anorexic and surviving on "celery" and "different flavors of oxygen" is actually really concerning, given that eating disorders are real, dangerous, and shouldn't be glorified:

And some tried to at least tried use the post as a way to remind others that, actually, you really don't have to feel bad or less than if you aren't as thin as a Kardashian — and that you definitely don't have to try to not eat so that you can be:

The Kardashians aren't exactly known for being feminist, body-positive icons, and honestly, given the amount of pressure they surely feel to look abnormally flawless at all times, it's not entirely surprising that being considered skinny would feel like a compliment. But that doesn't mean Kim should be proudly sharing that with the world.

Given the struggle that so many women already face to accept themselves when they're constantly being bombarded with airbrushed images and photos of women who don't actually resemble average, real-life, humans at all, it's already an uphill battle. Not only is Kim further adding to that burden by sharing the video from Sunday night, the seriously concerning "jokes" about anorexia take it to a whole new level. So while no one is necessarily suggesting that Kim should suddenly become a champion for self-acceptance at any size (though that would certainly be helpful!), the least she could do, it seems, is keep harmful videos like these to herself.