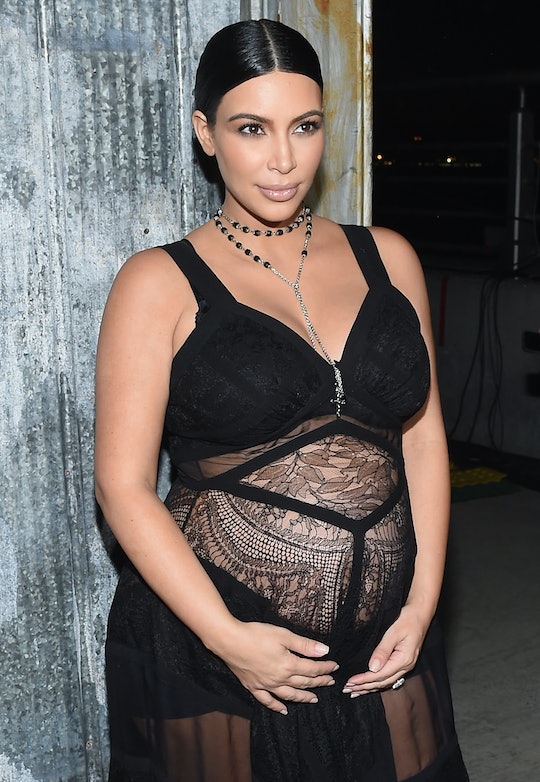 There were plenty of guesses as to what we could expect the newborn baby boy to be named when Kardashian's pregnancy was announced. But, despite the fact that the popular choice seemed to be Easton West (after Kardashian told Ellen DeGeneres that she liked the name, even if West did not), it was still unclear what we could expect the new member of the Kardashian clan to be named. Particularly when the couple themselves were flummoxed — based on a TMZ report published just days before Saint's birth, Kardashian and West were still unsure as to what to name their newborn son. And we already knew the couple got a late start, since Kardashian has said she didn't pick baby names until she was eight months pregnant.

But, it seems the couple ultimately came to a conclusion with Saint West, based on a post on Kardashian's website. (Which also revealed Saint was 8 pounds, 1 ounce at his birth.) It's a good thing they picked a solid name for their son — after all, one can expect to see it many, many headlines to come.

More Like This
Kourtney Kardashian & Travis Barker’s Kids Had Roles In Their Wedding
Kate Middleton Explains Why Her Kids Couldn't Attend The Top Gun: Maverick Premiere
Prince Harry & Meghan Markle Could Take Us Inside Their Home For A New Docuseries
Ashley Graham Reveals She Lost “Liters Of Blood” After Twins’ Home Birth