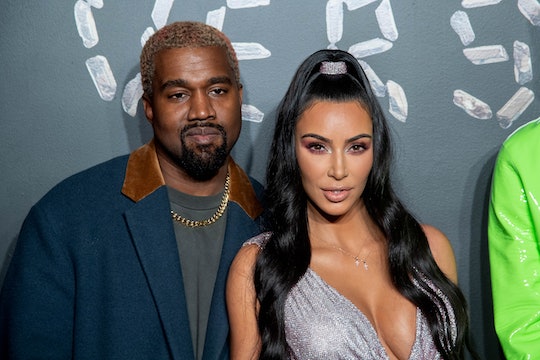 The Kardashian-West family is officially a family of six. After nine long months, Kim Kardashian and Kanye West have welcomed their fourth baby, a boy, born via surrogate, revealing the news on Twitter on Friday, May 10.

Kardashian hasn't yet shared the name or a photo of the couple's fourth child, but we do know he's a baby boy and he apparently looks a lot like his big sister, Chicago. "He’s also Chicago’s twin lol I’m sure he will change a lot but now he looks just like her," Kardashian shared in a separate tweet. The couple's newest bundle of joy joins big sisters North, 5, and Chicago, 1, and big brother Saint, 3.

Like the couple's third child Chicago, their fourth child was born via surrogate, who went into labor on Thursday evening, according to E! News. "My mom doesn't even know this but Kim's surrogate went into labor," Kardashian's sister Kourtney revealed during an appearance on The Ellen DeGeneres Show on Thursday night with their mom Kris Jenner. "So, she's at the hospital."

Kardashian had notoriously difficult pregnancies with North and Saint, as ELLE reported, and so she and West decided to try to further expand their family with the help of a surrogate. The couple used a different surrogate this time around, however. And true to form, Kardashian has been extremely open and honest about what the family's experience with surrogacy has been like.

"Anyone that says or thinks it is just the easy way out is just completely wrong," Kardashian told Entertainment Tonight back in November 2017. "I think it is so much harder to go through it this way, because you are not really in control." The Keeping Up With The Kardashians star continued:

And, you know, obviously you pick someone that you completely trust and that you have a good bond and relationship with, but it is still ... knowing that I was able to carry my first two babies and not, you know, my baby now, it's hard for me. So, it's definitely a harder experience than I anticipated just in the control area.

This second surrogate experience has been quite different for Kim K, however.

"I love my surrogate, we have a really good relationship. I really trust her and I definitely see, like, the first time that I went through it, I was a little bit more anxious, and texting more and calling more, and I feel like my surrogate this time around, really is such a protecting person and I really trust that in her," Kardashian told Entertainment Tonight in a recent interview. "I don't know if it's a fourth kid thing or, we've been through the surrogacy before, you just get a little bit more calm as they go."

Though the entire family is likely pretty happy about its newest addition, there might not be anyone more excited about their fourth baby's arrival than oldest sister North. Back in October 2018, Kardashian appeared on Ashley Graham's Pretty Big Deal podcast and told the model that North had a bit of a difficult time adjusting to being a big sister because she likes to act like an only child, as People reported. Kardashian added that North told Kardashian that she was hoping for another little brother one day, however, because then Saint would have someone else to play with.

Now, both North and Saint (and baby Chicago) have their younger brother. It remains to be seen whether North will ever get her (unlikely) girls-only side of the house, but hey, she's one step closer.

Congratulations to the happy family!