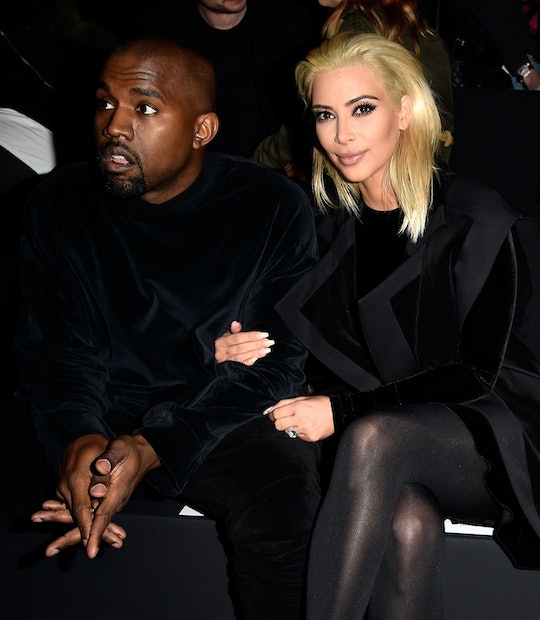 Kim K Is Reportedly Already Thinking About Asking Her Surrogate To Carry Baby No. 4

Keeping Up with the Kardashians star Kim Kardashian and her husband, Kanye West, only recently welcomed their third child into the world via surrogate, introducing Chicago West for the first time last week. However, the couple might already be looking at adding another child to the family: according to People, Kardashian reportedly wants her surrogate to carry another baby for her.

"Even before Chicago was born, Kim was talking about asking the surrogate to carry her next baby," an unnamed source reportedly told People recently. The source continued:

Kim definitely wants more kids. She is so happy being a family of five. She wants the family to get even bigger! ... She’s so happy with the whole process and thrilled with the surrogate.

Romper reached out to Kardashian's rep for comment, but did not hear back immediately. So far, though, Kardashian hasn't shared many details about the surrogate she used — other than clarifying in a blog post that the pregnancy took place using Kardashian's fertilized egg implanted in the gestational carrier, thus making Chicago 100 percent biologically Kardashian and West's.

"It’s not for everyone, but I absolutely love my gestational carrier and this was the best experience I’ve ever had," Kardashian wrote, according to Vogue. "She made our dreams of expanding our family come true."

People assume it’s better because you don’t have to deal with the physical changes, pain, or complications with delivery, but for me, it was so hard to not carry my own child, especially after I carried North and Saint.

The unnamed source speaking to People didn't clarify when Kardashian and West were looking to further expand their family via surrogate, but if Kardashian and West do decide to have a fourth child, they might hold off for another year or two. Their first child, North, was born in 2013; son Saint followed in 2015; and baby Chicago was only born via surrogate this January. If West and Kardashian continue in the same pattern, we might expect a fourth child in a couple of years.

In the past, Kardashian has talked about her dreams of having a bigger family. "I have so many siblings and I love it, they're my best friends and I would love that for my kids," Kardashian said on The Ellen DeGeneres Show in 2014, according to Us Weekly. "I don't think [I'd have] six, but maybe three or four — I go back and forth."

Other sources, however, have reportedly said that West would love to have a family of five or six kids, according to People.

Regardless of how many more kids Kardashian and West plan on having — if they even want to add more children to their brood, that is — using a surrogate again would make sense. Kardashian faced preeclampsia and placenta accreta in past pregnancies, and in early 2017, she was told she wouldn't be able to carry another baby safely.

Fortunately, Kardashian has had nothing but praise for the surrogate who gave birth to Chicago, and she said she and West felt like Chicago had been with them all along. An unnamed source later told Us Weekly that Kardashian was getting up for every middle-of-the-night feeding with Chi, and connecting with the baby easily.

It's great to hear that Kardashian had such a good experience with her surrogate — and if she decides to welcome Baby No. 4 into the family via a surrogate as well, you can bet the world will be just as excited to hear about the latest addition to the family.