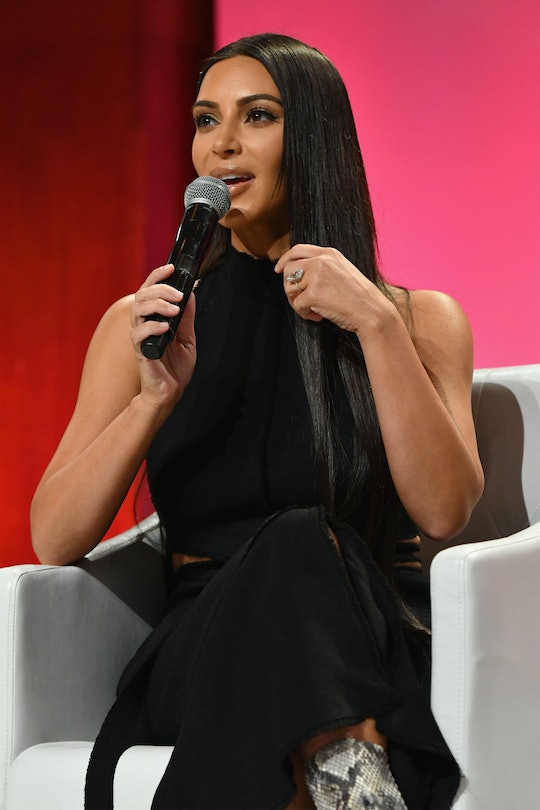 President Donald Trump's executive order to "ban" immigrants from Muslim-majority countries on Friday did not have the warmest reception. Trump's order resulted in protests at airports all across the nation over the weekend with many people speaking out about its severity — including celebrities. Even Kim Kardashian responded to the "Muslim ban" on Twitter and the facts are definitely on her side, despite what critics and the president's supporters might try to argue.

When Trump signed the executive order on Friday, which delivered on his campaign promise for the "extreme vetting" of immigrants, Trump did more than just tighten customs at airports. Instead, Trump's order banned foreign citizens traveling from seven different "Muslim majority" countries — Iran, Iraq, Syria, Sudan, Libya, Yemen, and Somalia — from entering the United States for the next 90 days. Trump's ban also suspended the admission for refugees to enter the country for the next 120 days. This, understandably, hasn't gone over so well. This ban has resulted in protests from people who believe that it is unconstitutional, taking to social media and going to airports to let their voices be heard.

Kardashian was among these people who let their voice be heard about the ban on social media, by posting a harrowing and very true infographic to her Twitter that perfectly explains whats wrong with the ban.

The infographic makes the facts clear — banning Muslims from the United States is pointless when thousands of others are killed by other dangers — (like beds or busses) that people would definitely not consider banning (it also turns the pro-gun lobby's main argument on its head). When the facts are presented so clearly, it is hard to ignore that this ban of immigrants from Muslim majority countries is not about the safety of Americans but potentially for other reasons. According to TMZ, the photo that Kardashian posted had statistics pulled from the Centers for Disease Control and Prevention.

According to CNN, a White House official said that the ban from travel to the United States from these countries is to "keep America safe." This ban roughly blocks 218 million people from entering the United States, according to CNN. But if Kardashian's tweet proves anything, it's that one could argue America's safety is compromised by many things — and 'that, in the grand scheme of things, "Muslim terrorists" ought to be, if nothing else, much further down the list.

Additionally, the countries selected for the ban are not countries we should be worried about, according to The New York Post — as Afghanistan, Pakistan, and Saudi Arabia are all countries left off the list but are still categorized as "high risk" for terror. (Meanwhile, Trump and his supporters have stated that the new ban is not a "ban on Muslims.") Trump's top aide, Kellyanne Conway told Fox News that the ban was about the travel of potential terrorists into the States, according to The Hill.

Kardashian's response to the "Muslim ban" is a powerful message that allows an objective look into why the ban was enacted in the first place. Despite what critics may say, the facts stand — if the United States government is banning Muslims from traveling into the United States, they might as well try to ban lawnmowers from being sold in stores too.