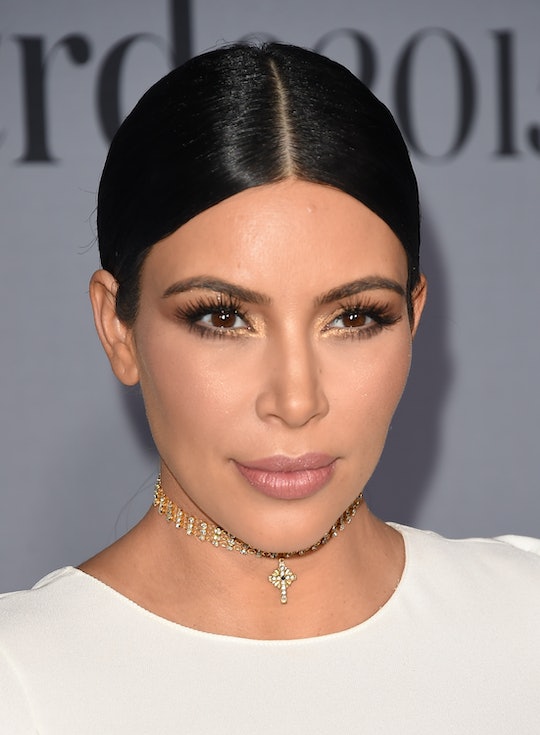 Kim Kardashian Responds To People Who Hated On Her Nude Selfie, & She's Not Having It

If a Kardashian tweets in the forest, and nobody has any bars, does it make a sound? It seems that not a week goes by without a member of the famous family sparking ire on Twitter. This week, according to E!'s Kardashian Kontroversy schedule, it's Kim's turn to garner attention, both negative and positive, by posting a polarizing pic. On Monday, Kardashian tweeted a nude photo of herself (covering the important bits with black bars) and captioned it, "When you're like I have nothing to wear LOL." A little over a day later, she's collected more than 200,000 likes and more than 115,000 retweets, and Kardashian wasted no time responding to her haters.

The negative responses ranged from flat out slut-shaming, to the more benign eyeroll GIFs, to some pretty funny jokes by way of Photoshop. But who cares what a bunch of nobodies think about it? Celebrities started weighing in, and things got interesting, because, if you know anything about the Kardashians, you know that they do not sit back and let people talk smack about them. First up, a tweet from Piers Morgan, which was predictably smarmy with a dose of icky: "I know the old man's $50 million in debt, Kim - but this is absurd. Want me to buy you some clothes?" Next up was Bette Midler:

Midler, of course, is from a generation when people saw a lot less celebrity skin, and she's not afraid of reminding people of that; remember when she kinda sorta called Ariana Grande a whore? Or when she poked fun at the fact that half of the people on Earth have seen Justin Bieber's penis without his consent? Not the best track record. With that in mind, though, this tweet was actually uncharacteristically gentle, and you can't deny it's pretty funny, especially when you consider the fact that Kardashian genuinely has fans who would pay $2.99 a month to see her esophagus.

Kardashian replied to Midler twice; once with her own joke, "hey @BetteMidler I know it's past your bedtime but if you're still up and reading this send nudes #justkidding." Then she got more personal:

The final, and most surprising reaction, came from actress Chloë Grace Moretz, who took two tweets to tell Kardashian, "I truly hope you realize how important setting goals are for young women, teaching them we have so much more to offer than just our bodies." While that sentiment in and of itself is of course completely valid, and a great point, the timing of it as a response to a nude photo has turned some fans against Moretz, who now accuse her of slut-shaming. Moretz responded to the accusations on Twitter: "There's a huge difference in respecting the platform that you're given as a celebrity and 'slut shaming' something I never have done and would never do."

Kardashian wrapped up the party by tweeting that "no one knows who [Moretz] is," bragging about how she's raking in millions with her app, and finally posting yet another nude selfie. The moral of the story is that Kardashian is rich and naked, and will most likely continue to be rich and naked for a very long time, and there's nothing that anyone can do about it. For better or for worse, there's no use tweeting at her about it. And, while Kardashian might not be the perfect role model when it comes to the treatment of women as only sexual objects, one could argue that she's at least teaching the lesson that you shouldn't let others police your body, either.