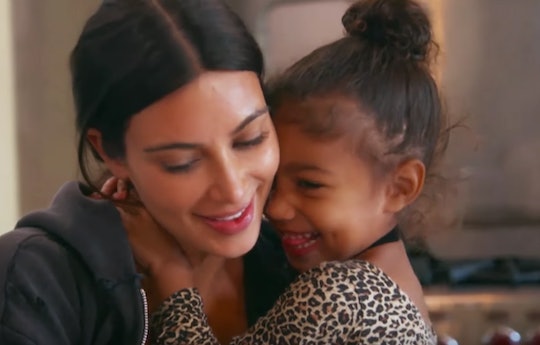 At just 5 years old, North West already lives a pretty cool life. I mean, it's kind of hard for her not to when her parents are Kim Kardashian and Kanye West. Sure, she might star in a reality show, be featured in a modeling campaign, and have one of the coolest families around. But, when it comes to her interests, for example, Kim Kardashian revealed North's YouTube obsession and it's probably the same as your own kid's.

There are so many things to watch on YouTube, like makeup tutorials or Keeping Up With The Kardashians highlights reels. But kids seem to have the most interesting taste in YouTube videos; they really can't seem to stay away from watching people play with slime, unbox toys, and pull pranks on one another. So, it makes perfect sense that 5-year-old North West would love watching one of these types of YouTube videos.

In a new interview with Access Hollywood, Kardashian revealed that North is super into watching specific YouTube videos. "She watches these girls do pranks," Kardashian said, according to Us Weekly. "She's into Halloween pranks and how we're going to make a scary haunted house."

Prank videos are a super popular genre on YouTube, according to New Statesman, and kids find these videos entertaining because some of them really are just funny. So, it really shouldn't come as a surprise that North is part of this audience of kids who love these videos.

But just because she loves watching prank videos doesn't mean that North will be making prank videos and putting them on YouTube any time soon. Kardashian quickly shot that idea down, saying, according to Us Weekly:

We tried to shoot a video yesterday. But she wasn't into actually filming it. She was like, camera shy. So I didn't push. She just wanted to make...weird cakes and ingredients with spiders all over it.

Although North wasn't into filming a video this week, that doesn't mean she won't want to do it in the future — especially if she has great ideas about what she wants to do on camera (like making that interesting cake).

This isn't even the first time that a member from the younger Kardashian generation made a foray into filming content of their own. In 2017, Kourtney Kardashian's daughter, Penelope, taught her mom's Instagram followers how to make slime in the sweetest set of tutorials, according to E! News. Just by watching these videos, you can tell that Penelope has so much fun watching (and making) tutorials of her own. And judging from Kardashian's words, it's likely that North does the same (when she isn't being shy).

North has some experience being in front of the camera. Not only does the little girl make her occasional appearance on Keeping Up With The Kardashians, according to Teen Vogue, but she also frequently appears on her mom's Instagram Story doing some pretty cute things — like applying makeup all over her face, according to People. So if North were to appear on YouTube one day, people wouldn't be too surprised.

Kardashian stated in an interview last year that North certainly has expressed an interest in making her own YouTube tutorials — but West was the one who shot the idea down. Kardashian said, according to Allure:

My daughter watches so many YouTube tutorials and videos, and she was unboxing the My Little Pony ColourPop collection and I thought to myself, "I wish I was recording this" because her reaction was so funny. And then she did makeup on the My Little Pony that they gave, and she said, "Mom I want to do a YouTube video."

While North might not be making her way to YouTube any time soon, it's clear that she has a very strong interest in it. And who knows? Maybe one day fans will see a North West YouTube channel... with spooky pranks if we're lucky.